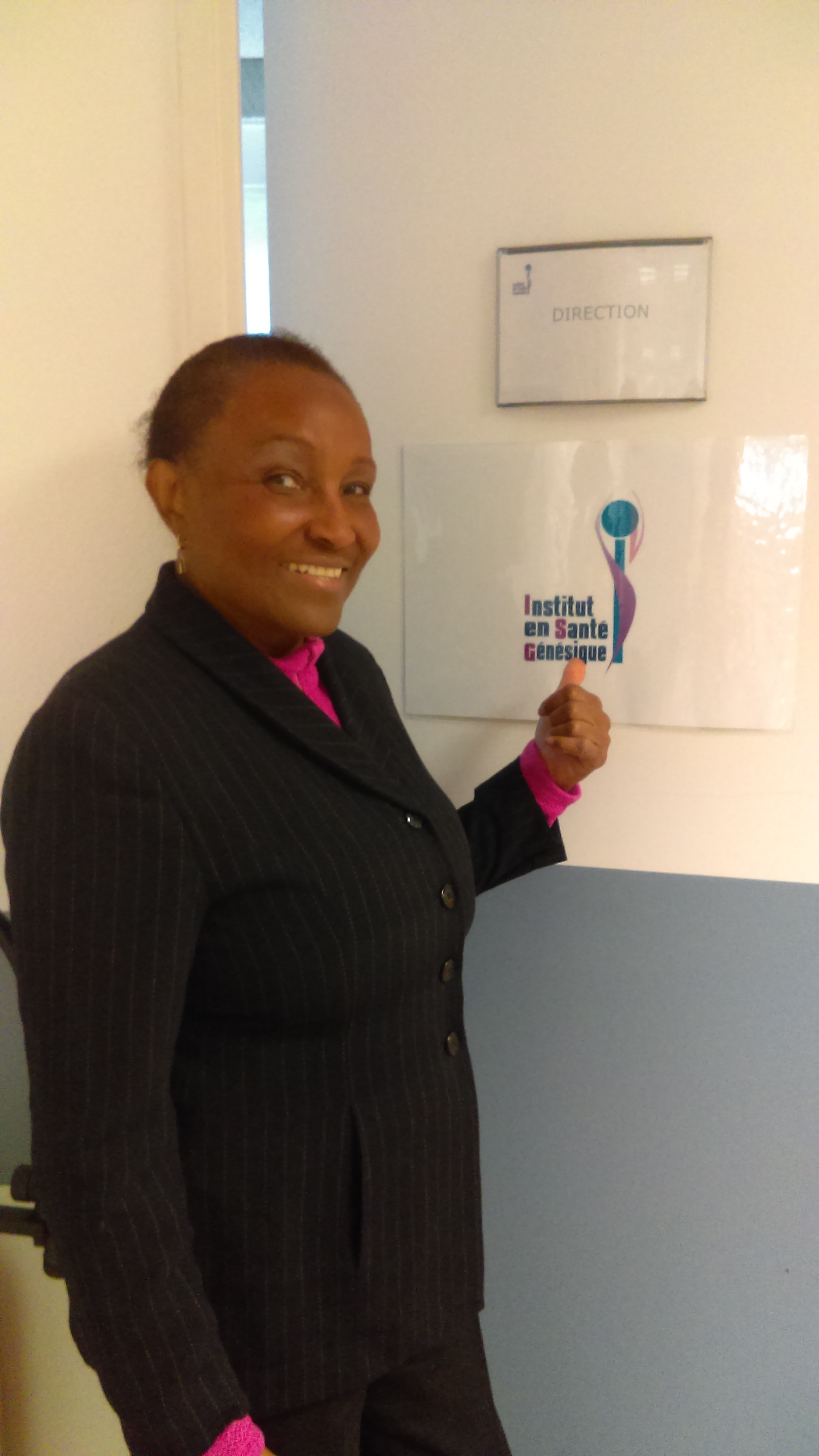 Last Tuesday I traveled to Paris to visit the Institut en Sante Genesique (the Institute for Sexual and Genital Health).  I was invited by Dr. Pierre Foldes and Ms. Frederique Martz to visit their Institut to get an idea of the approach they use in treating women that have experienced female genital mutilation (FGM).  I was accompanied by Elisabeth Wilson, (2016 Global Woman Awardee) of the Swiss based organization, Global Alliance against FGM.  Elisabeth and I boarded an early morning train from Geneva to Paris to visit the Institut.  Upon arrival in Paris, we took the Metro to the last stop of that particular line to the Saint Germain area of Paris.  I was fortunate to have Elisabeth with me, who is fluent in French.

Frederique came to the waiting room and escorted us to her office.  I readily chose one of the wooden African chairs in her office.  She smiled and asked, “Do you like the African chair?”  I told her how comfortable those chairs are.  Shortly after we were seated, another lady joined us in the office.  Frederique introduced her us and offered her a seat.  I was asked to tell the lady about the women whom we service that have undergone FGM.  She wanted to know their origins, backgrounds, etc.  That lady happened to be a donor and volunteer to the Institut.  We chatted with her, while she expressed her interest in the women and the work that is done to help restore their lives to normalcy.

Just before the meeting began, another lady joined us in the office.  She is the Head Psychologist at the Institut.  Originally from Egypt, she explained that she was brought in because many of the patients speak and understand Arabic, and do not speak or understand French.  She too was interested in the work we do in the U.S. with the survivors of FGM.  I explained our approach and the services we offer.

Although I had witnessed Dr. Foldes’ and Frederique’s presentation on Thursday, October 19th in Washington, D.C., visiting their Institut was an experience which I will never forget.  Frederique explained the importance of their holistic healing. She told us that the surgery is only a fraction of their holistic service.  The following is what the Institut says about their work and healing process:

“To receive appropriate assistance, a survivor seeking help must find acknowledgement and understanding of her trauma’s complexity from the professionals, clinicians and surgeons she consults. They in turn can assuage genital and sexual pain, taking her environment into account, which includes her work, society, family, and children.”

The statement from the Institut continued, “Given the heterogeneity of our clientele, the most important skill is listening. We hear what she has to say and respect her will. She is our guide.  Enabling her to formulate her own needs and to express personal desires is our foremost aim, and achieving this articulation is required for success. Within our protective walls, confidentiality and security are guaranteed.”

According to the Institut, excision constitutes a criminal pathology of human origin whose compelling consequences affect the total personality.

The Institut takes a precision approach to the healing of their patients.  “If you are only going to do the surgery, then do not bother to do it at all,” said Dr. Pierre Foldes, the Urologist who developed the surgery to physically repair women that have undergone FGM.

The Institut requires a patient to meet with them for an initial physical examination, followed by three weeks of consultation.  The consultation includes meeting with one of their psychologists, therapist and gynecologist.  After consultations with all such staff members, only then will the decision to undergo surgery is made; and that decision is made by the patient and not the staff.  If the patient decides to undergo FGM repair surgery, she is still required to have another three weeks of post-surgery consultations.  During the post-surgery consultations, the patient receives guidance in walking properly, psychological healing and close observation.  Therefore the total time a patient must be prepared to spend at the Institut is six weeks, if she decides to undergo surgery.

Co-founding the endowment fund for the Institut en Sante Gensique in 2013 with Ms. Frederique Martz, Dr. Pierre Foldes is a Surgeon Urologist.  He has been a member of “Médecins du Monde” since 1978.  He developed and promoted the surgical technique to restore the damage done during the ritual excision of female genital mutilation.  Dr. Foldes has conducted research on the anatomy and physiology of the human clitoris since 1991.  He has headed special surgical missions in Africa and Asia.  His first publication on the surgical technique was in 2003, and he has since released 6 additional publications to date.  He has administered 5,500 surgical cases of FGM and provided 15,000 consultations since 2004.  In 2006, Dr. Foldes became a member of the scientific committee of Equilbre et Populations and a Forensic Expert.

Global Woman P.E.A.C.E. Foundation realized that Dr. Foldes and Ms. Martz work collectively and the work of one is not recognized without the work of the other.  Therefore this past October both Foldes and Martz were awarded the Global Woman Award in the Medical Category for 2017.  Frédérique Martz coordinated the actions of an organization of liberal female doctors for a decade. For twenty years she held a leading position in a press group and a professional publishing house.  Frédérique Martz now assures the direction of the Institut en Santé Génésique, with a multidisciplinary team of 21 professionals (infirmaries, doctors, jurists, lawyers, psychologists). She is the inventor and organizer of the colloquium “Au Cœur des Violences: quand les femmes prennent la parole” (At the Heart of Violence: When Women Start Talking) on November 13, 2015.  She was also elected Ashoka Fellow in 2015.

The Institut states, “In France we have won recognition from social security and the national health care systems. These institutions recognize female sexual mutilation as a condition that merits coverage by social security for surgical repair.  Many solutions exist, and all of them must be accessible to all women and sustainable through follow-up consultations over a period of time.”  According to them, all proposed approaches start with respect for the woman’s words and her choices, and they expect every professional on their staff to keep this in mind. This includes strict adherence to confidentiality vis-à-vis the patient’s family and friends.  “Treating female genital and sexual mutilation can only be effective in the long term.  Sustained follow-up is essential to success.”  The explanation of their holistic approach continued, “Surgery can involve not only repair of the clitoris but also restoration of the labia minora, the posterior perineum and whatever scars may exist.  When restoration is chosen, the staff must remain available to talk to patients whenever necessary, for counseling and reassurance, during the first few weeks after the operation. When a patient may return to work, continue usual physical activities and resume intimate relations will be adapted to the speed of individual recovery.”

At the end of our meeting with Frederique and the staff, Dr. Foldes appeared in scrubs.  He had just come from performing surgery at the hospital across the street.  He proceeded to give us a tour of the Institut himself.  They have several rooms for consultations, offices, a conference room where they meet with patients in a roundtable setting, a reception room and a waiting room.  Elisabeth and I thoroughly enjoyed the tour and everything about our visit.  After posing with the staff for a few photos, it was time for us to leave for the train station.  We later took a three-hour train ride back to Geneva.

I was inspired to return to the U.S. and share what I witnessed and learned on the holistic approach from the Institut en Sante Genesique with our folks here at Global Woman P.E.A.C.E.