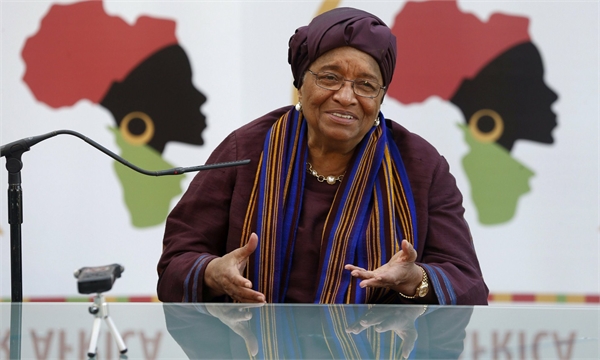 After more than two decades of pleading and urging the former Liberian President, Ellen Johnson-Sirleaf to ban the practice of female genital mutilation (FGM) in her country, she finally did so.  The Incoming Liberian President, George Manneh Weah was sworn in to the office of the Liberian Presidency on Monday, January 22nd.  Former President Johnson-Sirleaf made a last minute dash to sign several Executive Orders late Friday evening on January 19th.  One of those Executive Orders was the Domestic Violence Bill, which includes the clause to abolish the practice of FGM in Liberia.

With forty-three thousand square miles of coastal land, and a population of two million, Liberia is bordered by Sierra Leone, Guinea, Cote d’Ivoire (Ivory Coast) and the Atlantic Ocean.  Although Johnson-Sirleaf was the leader for longer than a decade, Liberia remained unmoved by the world’s pleas to outlaw the practice of FGM.  It was always the opinion of some Liberians that Johnson-Sirleaf was “soft” on the perpetrators of FGM.

In 2015, Johnson-Sirleaf addressed the United Nations General Assembly and made a commitment on gender equality and women’s empowerment, which included FGM and domestic violence.  However her Legislature at the time blocked her Bill to them on FGM.  They voted to exclude FGM from that Bill and passed everything else.  The reason the FGM clause was omitted is because many of the Liberian lawmakers are bonafide members of the Poro and Sande Societies, which lead the practice of FGM in that West African nation.

Then two years ago in January of 2016, the Liberian Minister of Gender, Children and Social Protection announced that she wanted FGM banned in her country.  Her announcement came just days after the United Nations called on Liberia to abolish all cultural traditional practices that violate human rights.  Such practices included FGM, forced initiation into secret societies, witchcraft accusations and trials by ordeal ritualistic killings.  It is embarrassing to know that the World Body of Nations would need to ask a founding-member nation to cease from practicing such demonic and archaic acts in the twenty-first century.  Liberia happens to be a founding member of the United Nations.

With all such requests from the United Nations, and urgings from NGOs around the world, the Liberian Government remained unmoved and silent when it came to abandoning FGM in that country.  Johnson-Sirleaf did not dare rock the boat against her Poro and Sande Legislators.  She remained soft on those who practiced FGM and other ritualistic crimes until she no longer needed their support and votes.  Global Woman Newsletter wishes it could send congratulations to the Liberian Outgoing President for her recent act this past weekend.  However there will be no applauds and congratulations to her.  While the former President was being careful not to antagonize her Poro and Sande Legislators and perpetrators, a 16-year old girl died from the consequences of FGM in 2017.  Three girls had to run for their lives to avoid FGM in 2016.  A woman’s back and genitals were forcibly mutilated after being ambushed at night in 2015.  Sorry Madam Former President; those crimes happened on your watch, while you protected the FGM excisors, and did not protect the innocent citizens of your country.  Therefore you receive no accolades from the NGO of this newsletter.

The key performances by Liberian excisors in the Sande Bush are clitoridectomy and labiadectomy.  A Liberian man from the Poro Society once remarked, “Female Genital Mutilation and the Sande society go hand in hand. It is difficult, if not impossible, to get rid of this time-tested tradition in Liberia.  Asking the women to abandon this age-old tradition is like telling someone to stop eating his or her favorite meal.”  Now that FGM is abolished in that country, how will this sudden Executive Order affect the Sande excisors and supporters?  Will they risk being arrested for practicing FGM, or will they stop it?  From a cultural perspective, the Executive Order could fall on deaf ears to the perpetrators in the Sande Bush.

Then there is the new administration in Liberia.  They now have a brand new President, who has no political background.  George Manneh Weah, more commonly known to the Soccer community as “Opong” was sworn in as Liberia’s twenty-fourth President last Saturday.  According to the Liberian constitution, his term will run for the next six years.  If he chooses to seek re-election at the end of his first term, there might be twelve years of Opong.  There are still questions the anti-FGM community has:  How does Weah regard the practice of FGM?  Will he see to it that this Executive Order is enforced or will he also avoid rocking the boat of his Poro and Sande Legislators?  Welcome to the Liberian Presidency, Mr. Weah!  You have a tremendous task ahead of you.  What are you going to do about this atrocity in your country?  Will you retain the Executive Order after your first year or will you dissolve it and allow the practice of FGM to continue legally?  The appeal is already going out to you to enforce the law against FGM in Liberia.  Brace yourself, President Weah!