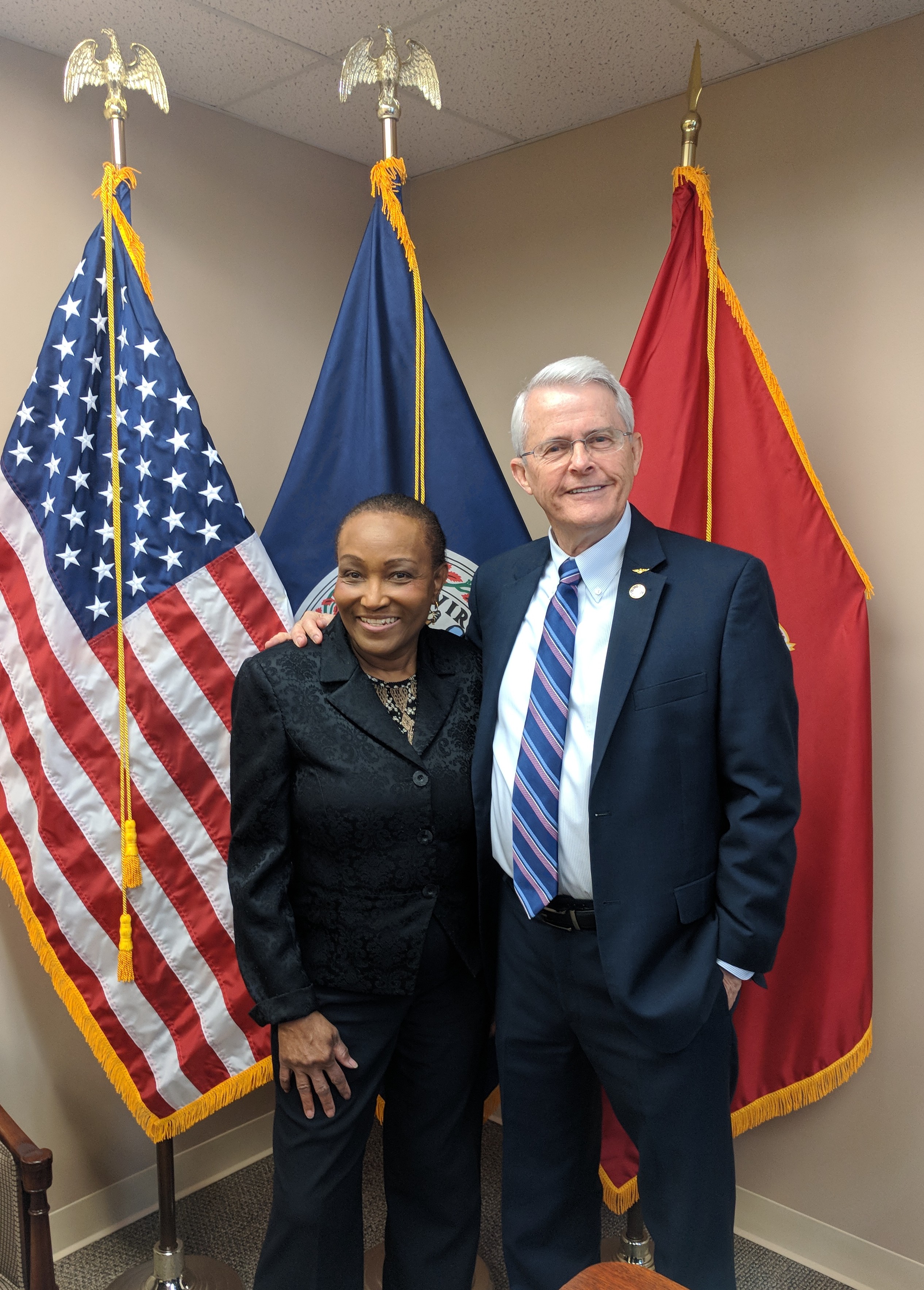 Two weeks ago this newsletter ran a story, asking if the U.S. state in which you reside has a law against FGM.  The newsletter received several responses and reactions to that question.  Some of you said you had checked and your states did not have a law against FGM.  While others were relieved to learn that their states did have a law prohibiting FGM.

Virginia was one of two U.S. states in 2017 that passed laws against female genital mutilation.  Two weeks ago, the story mentioned that Virginia Senator, Richard H. Black of the 13th District of Virginia had promised to revisit the Virginia law, which was initially passed as a misdemeanor.  The Senator had settled for the lesser charge due to budget appropriations.  He had not been pleased with the misdemeanor law; Senator Black was determined to keep his promise about amending the Bill 1060 from February 2017.

Global Woman P.E.A.C.E. Foundation (GWPF) received a sudden invitation from Senator Black’s office the Friday before he was scheduled to present his amended Bill to the Virginia Senate Committee on Criminal Justice.  The Senator requested that a delegation from GWPF appear in Richmond, the state capital to testify on the presence of FGM in the Commonwealth of Virginia on that following Monday.

The Executive Director of GWPF, another board member and a staff member traveled to Richmond to represent the organization in appearance before the State Senate Committee.  In the early chill of last week Monday morning, Angela Peabody, Aula Mohammed and Christine Hedstrom made their way to the State offices, located in the Pocahontas Building on East Main Street in Richmond.  The GWPF trio went through the metal detector as it is done in most government buildings.  They were directed to proceed to the Senate Hearing Room and wait until the Senator joined them.

As Angela, Aula and Christine sat in the Hearing Room, other witnesses began to arrive and take their seats.  The Senator’s assistant arrived and advised them to sit close to the front where they would be able to get to the podium with ease when they were called.  He briefed them on the procedures and the length of time they would be given to speak.  He told them that the docket of cases was a full one for that day.  However he assured them that Senator Black’s case would be called early.

It was easy to determine who the senators were as they entered the room.  Most of them sat in the front row, the row directly in front of where the GWPF delegation sat.  The Senate Committee piled into the room and took their places.  When Senator Black arrived, he was accompanied by other people.  He quickly located where the GWPF delegation sat, and made his way to them.  He greeted them and proceeded to brief them on their testimonies and who would be called first.  He verified their names and took his seat.

The Chairman of the Committee convened the hearing and called it to order.  Two other cases were called which gave the GWPF delegation an opportunity to observe and witness how other testimonies were conducted.  When Senator Black was called to the podium, the title of his case was displayed on the screens around the room.  The screen displayed Female Genital Mutilation.  The Senator introduced his Bill No. 47 to the Senate Committee, and explained that it was an amendment from the original Bill No. 1060 from 2017.  Senator Black advised the Chairman that he had some witnesses with him who would testify about FGM in the Commonwealth.  He then introduced the GWPF delegation by calling out the name of each woman.

Angela Peabody approached the podium, introduced herself and thanked the Chairman and the Committee for having them there.  She then defined female genital mutilation and described the actual procedure of FGM.  She told the Committee that a misdemeanor charge is not at all a deterrent for the perpetrators of FGM.  She stressed how important it is for the current law to be changed to a felony.  Peabody told them that being familiar with the cultural aspects of FGM and the people who perform it, a much graver penalty imposed is of utmost importance.  She thanked the Committee and stepped aside, joining Senator Black in the aisle.

Aula Mohammed, the Chair of Fundraising with the Board of Directors stepped up to the podium and introduced herself.  She told them a little about the work of the organization in the Commonwealth.  Then she shared the story about a father in Springfield, Virginia who had chased his young daughter down the street with a knife in his hand, as his daughter screamed to neighbors that her father wanted to cut off her genitals.  She explained how when the police was called, they did not know what FGM was, but one of the neighbors who intervened understood what the girl meant.  Three years earlier, the neighbor had attended a presentation on FGM at her church, presented by GWPF.  It was that presentation that had helped the good neighbor quickly identify female genital mutilation, as she came face to face with it.  As Aula Mohammed described the Springfield incident, the facial expressions of most of the Committee members exhibited the impact the story had on them.

Christine Hedstrom did not get the opportunity to testify due to time limitation.  However an attorney from the Commonwealth State Attorney’s office walked up to the podium without an introduction, and told the Committee that he wholeheartedly supported the Bill No. 47.

With that said, the Chairman instructed the Committee to vote.  The Committee voted electronically, as Angela, Aula and Christine sat tensely.  They watched the television screen as the ‘yeas’ tallied in, and when it was over, there were no ‘nays’ from the Committee.  It was unanimous that the Senate Committee on Criminal Justice wanted Bill No. 47 to be passed.  The GWPF representatives celebrated with Senator Black.

A Class 2 felony crime in the Commonwealth of Virginia is punishable by up to life in prison, and it has a minimum prison sentence of twenty years, with a fine of up to $100,000. Some examples of class 2 felony crimes in Virginia include murder and burglary with a deadly weapon.  Should Bill No. 47 pass through the rest of the Senate Committees and General Assembly, the crime of FGM in the Commonwealth of Virginia will carry a twenty-year to life sentence and a $100,000 fine.  If that is not a deterrent enough to make one reconsider having his or her daughter subjected to FGM, then what is?

Angela, Aula and Christine were in a victorious mood, and went out to a local restaurant in celebration.  It was a pleasant trip back from Southern Virginia to Northern Virginia last week Monday.

Senator Black is applauded for his diligence in getting the law passed in his state, and continues to push for a much graver law against female genital mutilation.