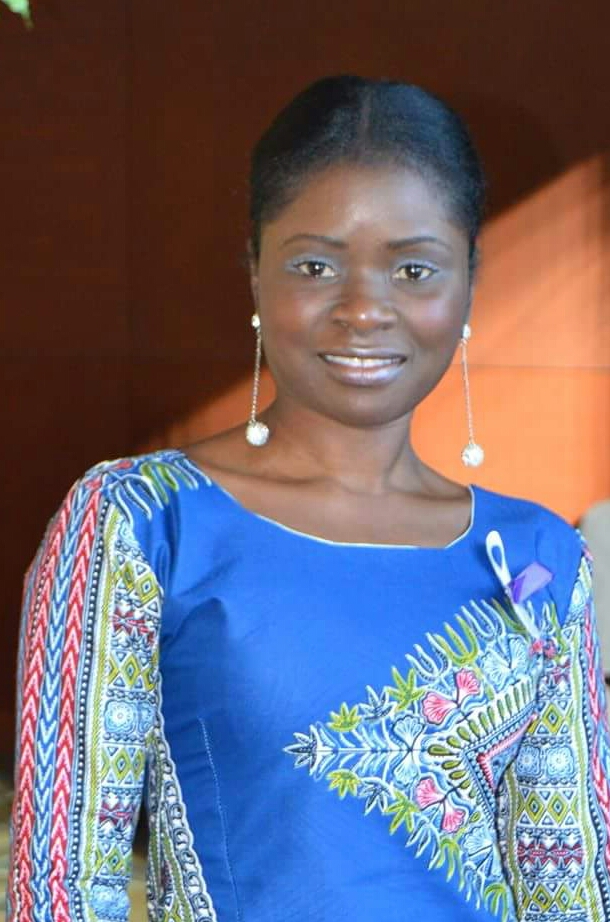 On August 1, 1984, less than a month after celebrating my 11th birthday, I was subjected to the most brutal form of sexual violence – Female Genital Mutilation (FGM). My step-mother and Papa both decided it was for my good, neglecting to ask me if it was something I wanted. My Mum who is Creole and was not subjected to FGM did not come to my aid, so my step-mother, whom I believe manipulated Papa’s decision took my older sister and me to the ‘chamber of torture’.  My father was not Muslim; he was Catholic and a doctor, yet he allowed it to be done to us, his daughters.

Fast forward 33 years later, having being connected with Angela Peabody and Global Woman P.E.A.C.E. Foundation (GWPF), a change occurred in my life – clitoral restorative surgery. Because I’m writing a book about that experience, I will not share in detail everything that happened.

On September 21, 2017 Global Woman P.E.A.C.E. Foundation, through the generosity of its donors, sent their first FGM survivor for clitoral restorative surgery.  That survivor was I.  As the day drew closer, I noticed I was having anxiety attacks mainly because I thought the level of post-surgery pain would be much like the pain I experienced on the evening of August 1, 1984. I thought about being unable to urinate, walk, and sit after surgery. I thought about dying during surgery. The surgeon whom I had the privilege of meeting two years prior is someone I love and knowing that she knows me, gave me some hope and encouragement.

Pulling my carry-on luggage behind me as I boarded my flight to San Mateo, California, I felt tightness in my vagina (my hoo-haa) that caused me to almost turn around and head back home. I have heard people say, “The anticipation of death is worse than death itself” and I lived it for four days.  On the day of my surgery, as I lay on the operating bed, I again had panic attacks, and I almost got up and walked out. The nurses however who were assigned to my case helped in reassuring me that everything would be all right – and everything was all right – to some extent.

Following surgery, I returned to my home in Germantown, Maryland.  I tried to adjust to my new way of doing things, such as showering, sitting, sleeping, walking, etc. I had a difficult time sleeping on my back with legs apart. I was unable to lie in the fetus position to which I was accustomed. You probably wonder why I was unable to sleep in my familiar position. It is because my hoo-haa was quite swollen and having my thighs together was painful. Bending down to pick up things off the floor was as equally painful, and so was sitting with my legs crossed. I often wondered if all of it worth undergoing the surgery. In retrospect, you bet it was worth it, but I’ll find out to what degree it was worth it, after I am married and try out my new vagina.

One evening a few days after my surgery, while watching television, I had this weird but good, very good sensation in my hoo-haa area. I quickly got my mobile phone and sent a text message to my surgeon telling her about this feeling to which I was not accustomed. She wrote back saying “that’s your clitoris. That’s what it does.” “No kidding!” I said.  Is this what I have been missing out on? So, this is one of the functions of this beautiful thing called the clitoris?  I was upset.  After popping a Vicodin, which was prescribed to me for the pain, I waited to fall asleep hoping I would awake hours later feeling better. I only took the Vicodin when I was unable to sleep due to the pain.  It did not work. I fumed for a few days after that.  It was just the thought of what had been done to me at 11 years old had deprived me of the natural feelings an experiences God intended for me when he made me.

It has been four months and I am still trying to adjust to my new life. Being #ReUNITeD with my clitoris is one of the most beautiful feelings of completeness I’ve experienced; thanks to Global Woman P.E.A.C.E. Foundation and its donors.

F.A. Cole is an inspiration to many women who have survived female genital mutilation and other injustices against women and girls.  She is one of the bravest young women with whom GWPF has worked.  Her healing process lasted much longer than she and GWPF had anticipated.  Global Woman P.E.A.C.E. Foundation referred Cole to French Urologist, Dr. Foldes in Paris, France who had developed the clitoral restorative surgery.  GWPF sent her to Paris to confer with Dr. Foldes.

Cole returned to the United States and is now doing much better.  Her overall healing, which included physical therapy has gone well.  As she mentioned, she has no regrets in having the surgery, and GWPF is pleased to know that she is well.  The priority of the organization is the well-being of the women and girls affected by female genital mutilation.  While all advocates should work toward ending the practice of FGM, the healing of the survivors of this practice is also of utmost importance.

FGM does not only leave women and girls with physical injury and pain; it leaves them with a much graver pain – the psychological pain.  The healing process does not only include the physical healing.  The women go through a lifetime of psychological pain, and most of them never seek or receive healing entirely.  It is GWPF’s hope that other FGM survivors will allow themselves to heal like F.A. Cole has allowed herself to heal.  Cole will continue to heal as she shares her story openly with others, and encourage other survivors to come forward and share their own stories as well.  It is all part of the healing process.

Recently F.A. Cole traveled to Pennsylvania to speak out about a pending bill in that state to ban female genital mutilation.  Last week she was in Maine, where she pleaded with the officials in Maine to pass the law against FGM.  “I’m pleading with the legislators in Maine, please protect these girls,” Cole said during her visit to Maine.  Cole is not only a survivor of FGM; she is an advocate, author and speaker.  It is very little wonder why her healing has gone so well.

If you are reading this article and you are a survivor of FGM, or you know someone who is a survivor, please contact Global Woman P.E.A.C.E. Foundation.  The organization is here to assist you, if you need to speak with someone.  Your story will be kept confidential unless you say otherwise.