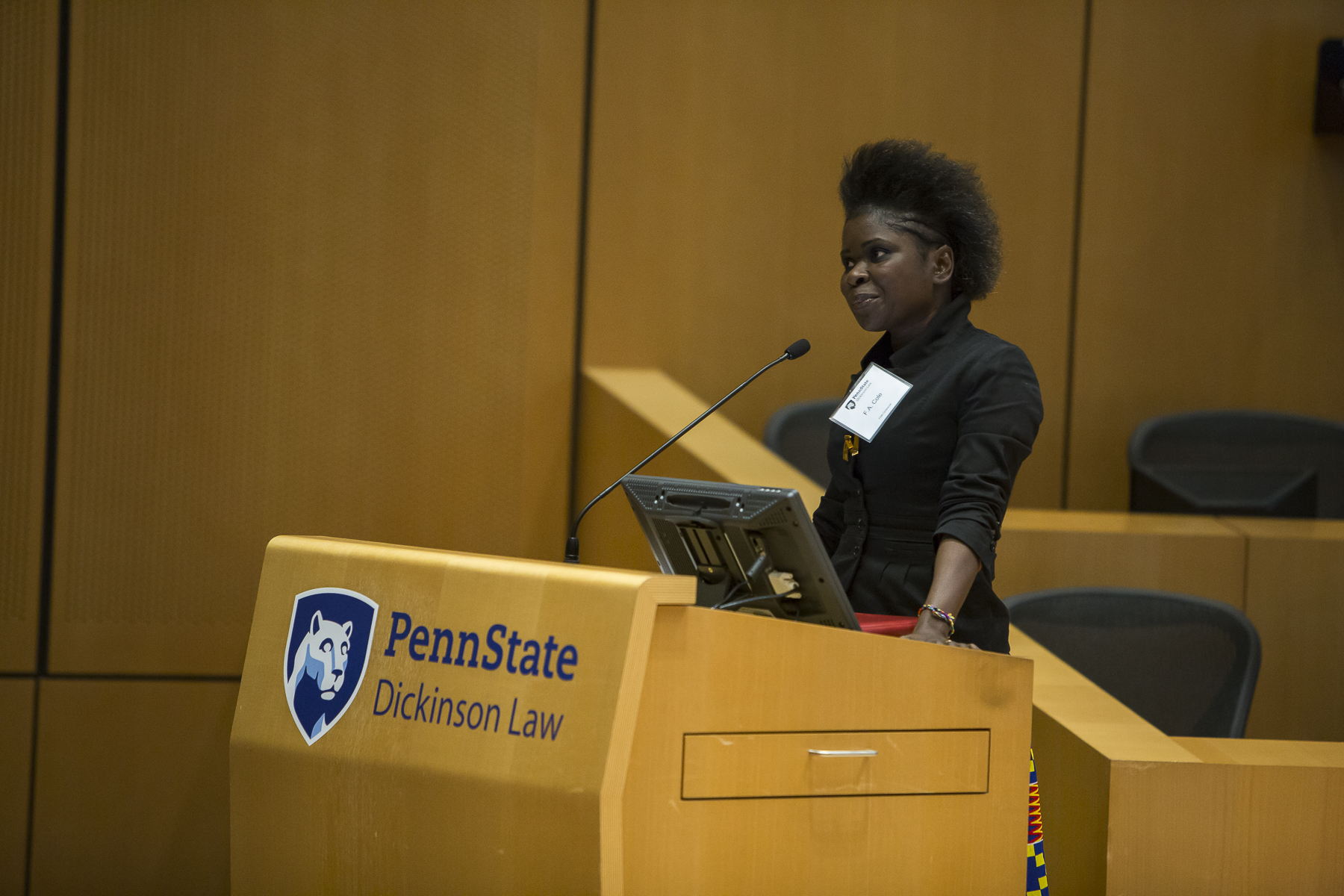 Global Woman Newsletter (GWN) is releasing the corrected version of Tuesday, April 24, 2018   story on Penn State’s Dickinson Law Students Host FGM Conference.  This is due to information mentioned in Tuesday’s release, which was incorrect.  Thank you for your patience.

Since 1980, April 12th has always been a grim day for my family and me.  It is the anniversary of that dreadful day when our lives in our native Liberia entirely changed forever.  It is the day that my family and I survived one of Africa’s bloodiest coup d’etat.  The Liberian Government was overthrown by the military.  I usually spend the day reflecting on what happened to us so long ago, and the struggle of assimilating to American society.  I also review where we currently are and I take a look ahead to where we plan to continue.  Well, this year on April 12th, I found myself doing something entirely different from earlier years.  I was in Carlisle, Pennsylvania where I attended and participated in a conference on female genital mutilation (FGM).  I found Carlisle to be a quaint historic college town.  Named by its settlers after a city in England, Carlisle was established in 1751.

The conference, Crafting Legislative and Medical Solutions to Address Female Genital Mutilation Locally and Internationally was hosted by students and faculty of the Dickinson Law School and Penn State College of Medicine of Penn State University.  Registration started at 8:00 in the morning, while breakfast was served at the same time for one hour.  Then it was time for the program to begin.  Everyone piled in the large Apfelbaum Family Courtroom in Katz Hall at Dickinson Law School, where the program was held.  Introducing the Dean of Dickinson Law, Gary Gildin for the welcome address was Alexia Tomlinson, one of the student coordinators of the FGM Legislation Project of Dickinson Law.

The students did a superb job of bringing together an extraordinary group of panelists to address issues surrounding the practice of female genital mutilation.  The conference addressed the gaps in legislation, while presenting medical information and solutions to educate the public, lawyers, and medical professionals about FGM.  The purpose of the FGM Legislation Project was to create legislative solutions to FGM.  The three objectives of this project were as follows:

I wanted to know what the motivation was for the students to take on such a project.  Erin Varley said, “In the Fall of 2016, most of us took an International Enforcement of Human Rights seminar course, taught by Professor Dermot Groome.  Part of the course required a thesis.  I have always been passionate about addressing gender based violence and chose to write about FGM.  After presenting my paper, Professor Groome noted it was odd that there were not any documents that specifically prohibited FGM worldwide.  He then challenged me to address that legislative gap.”  Erin continued, “In response, I recruited several other individuals that had a passion for addressing FGM.  They generously agreed to give up many nights and weekends to work on the issue.  We soon realized that Pennsylvania did not have a law prohibiting FGM, so we decided to focus our work at the state and international levels.  Soon after, we founded the FGM Legislation Project.”

Robert Daniell, another student with the project said, “I was motivated to work on this project after attending a class lead by our project leader, Erin Varley.  During the class, Erin informed us of the widespread roots of FGM and the barriers that Human Rights advocates face in putting an end to the practice.  I left the class frustrated by the hindrances standing in the way of effectively eliminating FGM.”  Robert further stated, “A short time later, Erin expressed to me her interest in using her role as an aspiring attorney to fight against FGM.  I was eager for the opportunity to be a part of such important work and immediately asked her for the privilege of contributing.  Thanks to Erin’s initiative and leadership, I have had the honor of helping to push this project forward.”

I wanted to know from the students if it was difficult to engage the exceptional brilliant minds they had gathered in Carlisle for the conference.  Erin explained, “We thought the process would be far more challenging than it was.  We had a list of people we thought would be fantastic for the conference and knew we wanted to incorporate a wide variety of professionals and perspectives.  We knew the list was ambitious, but we had to try.  Thankfully, the AHA Foundation and Professor Groome connected us to a wonderful network of people who were so passionate about addressing FGM.  Their enthusiasm was contagious and our ‘wish list’ of speakers agreed to participate.  Now, we are so grateful to be a part of this incredible network – we have formed personal and professional relationships that we know will continue throughout time.”

Lindsay Daniels, another student of this magnificent project added, “Fortunately, the members of the anti-FGM advocacy community embraced our mission and were wholeheartedly engaged in our projects.  Additionally, the faculty at Dickinson Law gave invaluable feedback and time to the projects, including challenging us to think about all sides of the legislation and protocol drafting, and even serving on panels.”

I requested that each student on the project share with us what it was like for each of them in planning such a successful event.  According to Robert, “It was a privilege to be a part of this event and inspiring to see the willingness of professionals across numerous fields to come together and take a stand against FGM.”  Lindsey said, “Planning Crafting Legislative and Medical Solutions to Address Female Genital Mutilation Locally and Internationally was really inspirational for me.  It showed me the power that lawyers and law students can have, especially when collaborating with other professionals, like doctors, community groups, and activists.”

Alexia Tomlinson told me, “As with every event of this magnitude, bringing it together was complicated and stressful at times.  But as a group we felt passionately about the cause, and working with that level of enthusiasm and support made the work much easier.  Also knowing the amazing people who agreed to speak and participate was an inspiration throughout the planning process.”

Erin said planning the conference did require a lot of time and energy from the members of the project and the staff and faculty of Dickinson Law.  She added, “However, this conference was one of those endeavors that energized those involved.  Our speakers and Working Group members were exceptionally easy to collaborate with and were continually inspired by their work and efforts.”

I asked if this event will become an annual affair, even though many of the students will not be at the university next year after graduation.  Erin responded, “We are working on establishing the FGM Legislation Project as a long-term initiative at Dickinson Law that will continue working at the state and international levels.”  She said their primary upcoming goals are to advocate for a comprehensive Pennsylvania state law and to continue developing an international FGM Protocol.  She continued, “This year, the conference was designed to assist both of those endeavors.  Our hope is to expand upon the conference’s success in future years and to continue hosting Working Group sessions, think tanks, and other events that work toward ending FGM.”

I asked the students what they think will play a leading role in the eradication of FGM.  The following statements from Lindsey, Robert and Erin gave me insightful answers:

Lindsay – “I think education and grassroots activism will play a leading role in eradicating FGM, complimented by domestic and international legislative solutions.”

Robert – “FGM will be eradicated by survivors like F.A. Cole, who are brave enough to shed light on the harsh realities of FGM; by organizations like Global Woman P.E.A.C.E Foundation, who spread awareness about FGM and unite people to make a difference; and finally, by collaborative and interdisciplinary efforts to eradicate the practice on a systematic level.  By bringing together doctors, lawyers, researchers, child psychologists, advocacy organizations, and victims, these gatherings will help facilitate a powerful and united movement towards ending FGM.”

Erin – “I think survivor-led, grassroots education efforts in practicing communities are the most effective means of ending FGM.  I also think it is essential to include a wide variety of professionals in these efforts, including doctors, lawyers, and community leaders in the process.  FGM needs to be addressed at all levels, and no single solution will, alone, eradicate FGM.”

At the end of my stay in Carlisle, I left with more hope, assurance and courage than I had before I arrived there.  I was pleased to have been a part of such gathering of the minds of physicians, attorneys, senators, advocates, activists, social workers, survivors, concerned citizens, etc.  I have no doubt that Crafting Legislative and Medical Solutions to Address FGM Locally and Internationally will succeed, and move on to make a difference in ending FGM.  These students are inspirational, and they are a reminder that we need more young people like them to take on the campaign against FGM.  Erin, Lindsay, Daniell, Alexia and Robert might move on to careers in the legal system after graduation, but what they initiated on April 12th will live on, as they pass the torch on to underclassmen/women.  For the first time in more than three decades, I spent April 12th with a positive mindset, thanks to these students.