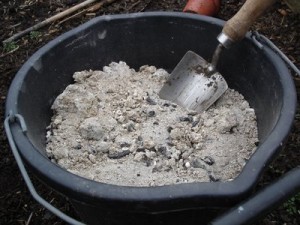 This newsletter was created and is committed to providing information on the practice of female genital mutilation, and anything that relates to it.  The following piece is unusual for Global Woman Newsletter, but I thought it would interest our readers as much as it interested me.

I recently heard a story from a survivor of female genital mutilation (FGM) that led me to delve deeper into her claim.  Her story took me back to personal memories of my life in my native Liberia.  The survivor shared her experience with FGM when she was only a little under 6 years old.  She recalled watching as her cousin was undergoing FGM until it was her turn.  She explained how the exciser sprinkled ashes from wood over her cousin’s wound after she had finished cutting off parts of her genitalia.  She then ran away but unfortunately was caught and was restrained.

The survivor’s story jogged my memory, and I recalled when my 2-year old son suffered nose bleed out in the backyard in Liberia.  A visiting family member took a piece of firewood coal and stuck it in his nostrils to stop the bleeding.  While I protested and attempted to remove the pieces of coal from my son’s nostrils, to my surprise, the bleeding had stopped.  Prior to that incident, when he suffered nose bleeds, we always used cotton balls in his nostrils to stop the bleeding.  As I listened to the survivor’s account of how her exciser sprinkled ashes over her cousin’s and her own wounds, I took to the internet for additional information.  I figured when burned entirely, the firewood coal becomes ashes.  I wondered how many excisers around the world used wood ash to heal the wounds of the little girls on whom they perform FGM.

Wood ash is defined as the residue powder after the combustion of wood, such as burning wood in a fireplace in the home, or in an industrial power plant.  Wood ash is traditionally used by gardeners as a source of potash or fertilizer.  According to researchers at Isra University in Hyderabad, Pakistan, the topical administration of ash along with local defense mechanism appeared to be superior to other types of therapies, as it reduced super infection and enhanced epithelization in healing skin wounds.  They collected and prepared both wood ash and charcoal ash from completely burning of the parent material of wood chips and dead branches.  The ashes were analyzed and applied, just as they would apply an ointment made from polymyxin B-bacitracin zinc.  The result was that healing by both wood ash and charcoal ash were significantly better and faster in comparison to the ointment.  The researchers found that ashes accelerated the wound healing process and gave maximum cover as an antiseptic and anti-infective. The complete recovery was observed within a period of 11 to 13 days.

Although the FGM survivor with whom I spoke was barely 6 years old at the time she experienced FGM, and witnessed her exciser use wood ash on their wounds, her recollection was vivid.  It is obvious that the excisers utilizing wood ash as a post-FGM healing agent are in remote villages in Africa, Southeast Asia and the Middle East.  They are still posing a risk to the girls.  They are not medical personnel or chemists, neither are they in a clinical environment while they administer the wood ash to the wounds.

While the wood ash might work on the wounds of some FGM survivors, the use of ash is not entirely safe, I found.  I also learned of the various disadvantages of using wood ash as a healing agent, especially on the genitalia.  Wood ash has been known to irritate the wound and increases the amount of scarring.  It causes discoloration of the wound in a way that is similar to rubbing ink on the skin.  The discoloration created by rubbing ash on the skin leaves an inconsistent pattern in appearance.  According to the report from Bmezine.com Encyclopedia, the introduction of any foreign body into a wound increases the risk of infection.  The report further states that ash is incompletely combusted wood, essentially it is carbon with a monoxide outer layer. It also suggests that such substances are something called carcinogenic, which can possibly cause cancer.

The female genitalia could probably be considered the most sensitive part of the body.  Reports show that some people have allergic reactions to certain types of wood.  The use of wood ash on an open wound such as on the genitalia could be putting the patient at risk of experiencing an allergic reaction.  This is mainly due to wood toxicity.  With that in mind, certainly the excisers in remote villages are not aware of wood toxicity and the possibility of allergies.  As though the enormity of the risk of performing FGM on a girl is not sufficient; but administering a supposedly healing substance that could cause additional complications is extreme.

More than one out of every 10 girl that experiences FGM is likely to suffer at least the most common complications.  How do we prevent toxic allergies on girls at risk of FGM?  The answer is simple; do not create a wound on the girl’s genitalia at all.  Is it really that simple?  I guess not, since our advocacy work against this practice seems to continue to increase.