Five years ago in 2014, the Executive Director of Global Woman P.E.A.C.E. Foundation (GWPF) submitted a proposal to its Board of Directors to host a walk-A-thon against FGM in Washington, D.C.  It was a tall proposal, considering GWPF had never before hosted an event of that size and type.  The purpose was to raise awareness, inform and educate the American public on the practice of female genital mutilation (FGM), and its presence here in the U.S.  The Executive Director was able to successfully convince the other members to approve the event.  It was agreed that the event had to be a success in order to make it an annual affair.  The Directors debated back and forth as to what the walk-A-thon should be called.  Several names were thrown around, and they eventually voted on “Walk To End FGM” (#walk2endFGM), and the planning committee began its work for their first big event.  It became a learning experience, working with the National Park Service, engaging service providers, attracting sponsors, inviting speakers and working out the required logistics.

On a brisk morning, Saturday, November 8, 2014, the “Walk To End FGM” (#walk2endFGM) was born on the National Mall in Washington, D.C.  The members of Global Woman P.E.A.C.E. Foundation shivered in the early morning but the cold was not all that caused them to shiver; they were equally nervous for the success or failure of the event.  They warmed up as participants queued in to pick up their t-shirts and give-away bags, and their guest speakers arrived.  They felt that even if fifty people turned out, they would consider it a success.  By the time they began the walk, more than 250 participants had arrived, and the support was phenomenal.  In the 2014 year-end board meeting, the Board of Directors voted unanimously to make the Walk To End FGM (#walk2endFGM) an annual event.

The Walk To End FGM (#walk2endFGM) took on a life of its own, as the organization began to promote the October 31, 2015 walk-A-thon.  Calls came in from people with questions about the event, and how they could register.  The process became a little easier in attracting speakers and sponsors.  The fact that they had repeat sponsors and supporters in the second year told them that people were pleased with the Walk To End FGM (#walk2endFGM).  There was a much larger turnout in 2015 by women who had experienced FGM.  Inquiries came in about the possibility of the walk-A-thon being held in other cities in the U.S. as well as in countries such as Kenya and the U.K.  The 2016 Walk To End FGM (#walk2endFGM) was larger than the earlier years.  On October 15, 2016 the organization was joined by several of its supporters on the Washington National Mall.  The 2016 walk-A-thon brought the international anti-FGM community to Washington, D.C. from various parts of Europe and around the U.S.  In 2017 GWPF took the walk-A-thon another step further.  They collaborated with the Milken Institute of George Washington University in a special pre-walk panel discussion two days prior to the day of the walk.  The panel included French Urologist and creator of the post-FGM genital restorative surgery, Dr. Pierre Foldes and French anti-FGM attorney, Linda Weil Curiel.  The 2017 Walk To End FGM (#walk2endFGM) attracted the largest international participation since its inception in 2014.

Now GWPF finds itself in preparation for the fifth Walk To End FGM (#walk2endFGM), with this one projected to be the largest to date.  This October 27th, the organization will be joined by several of its supporters on the National Mall in Washington, D.C. to make their voices heard that the practice of FGM has no place in, not only the U.S. but in the world.  This year, the pre-walk program has a unique keynote speaker, along with an activist and a couple of FGM survivors.

This year GWPF is turning the Walk To End FGM (#walk2endFGM) into a 2-day event.  One of the highlights of the 2-day event is the Global Woman Awards on Friday evening, October 26th.  The international nominating committee is currently submitting nominees in the various categories.  The committee will vote on each category the first week of July, but the winners will not be announced until the evening of October 26th during the ceremony.

GWPF encourages participants to form teams and join in the fundraising efforts to support the Global Woman Center, where women and girls will receive counseling, will be sent out for restorative surgery, and receive resettlement assistance.  As with previous years, the three teams that raise the most amounts will be presented with first, second and third prizes.  The pre-walk ceremony is expected to begin at 12:30pm EST, and the walk-a-thon will commence at approximately 1:30pm.  Participants will begin claiming their t-shirts and giveaway bags at 12:00 noon.  The participants look forward to a day of excitement and awareness.  To be a part of the day, visit www.globalwomanpeacefoundation.org  and click on “Register to Walk”.

If you would like to join the volunteer committee for this event you may contact the committee at info@globalwomanpeacefoundation.org and put “Volunteer Committee” in the subject line, or you may call 703.818.3787.

For overnight accommodations, the official hotel is the Tysons Corner Marriott, 8028 Leesburg Pike, Tysons Corner, Virginia 22182.  The deadline to obtain the special negotiated rate is Thursday, September 27, 2018.    All reservations must be guaranteed with a major credit card.  A special link to the reservation page will be available within the next couple of weeks.

Watch out for additional information in the upcoming months about the Walk To End FGM (#walk2endFGM). 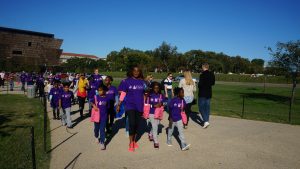 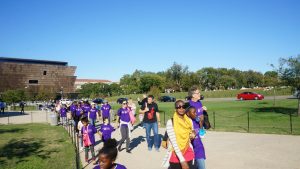