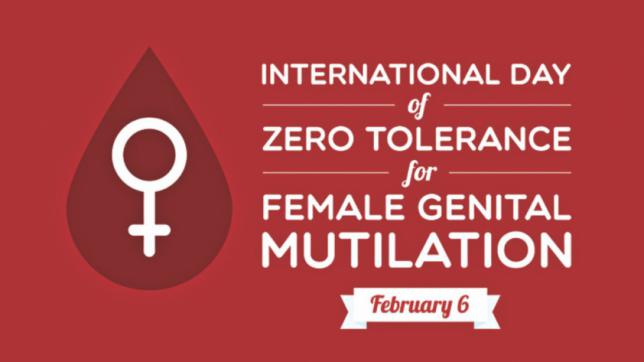 In 2015, FGM was included in the Sustainable Development Goals under Target 5.3, which calls for the elimination of all harmful practices.  Examples of harmful practices beside FGM are Son-Preference, (fathers aborting or killing female babies) Forced and Early Marriages, Bride Kidnapping, Honor Crimes, Stoning or Flogging of Women, Forced Pregnancy, Breast Ironing,

Witch Burning and Beheading of women and girls.  According to the World Health Organization (WHO), it is estimated that more than 200 million women have been subjected to FGM, and more than 3 million girls are estimated to be at risk each year in the world.

Female genital mutilation is the partial or total removal of the female external genitalia for non-medical reasons.  External genitals include the clitoris, labia, pubis (the fatty tissue over the pubic bone), and the urethral and vaginal openings.  Most girls undergo FGM when they are between 7 and 13 years old.  However, FGM seems to be occurring at much earlier ages in several countries because parents want to reduce the trauma to their children.  They also do not want the girls to later recall the details, and disclose them.  Although some practicing communities claim that FGM is a religious practice, it has nothing to do with religion.  To date many countries in the world and states in the United States have passed laws criminalizing the practice of FGM.  However raising awareness, sharing information and educating communities are crucial in the work against FGM.

Tomorrow, Global Woman P.E.A.C.E. Foundation (GWPF) will join other anti-FGM organizations, advocates and activists around the world in sending the message that the world will not tolerate the practice of FGM.  As a member organization of the US End FGM/C Network, Global Woman P.E.A.C.E. Foundation will join like-minded organizations in observing International Day of Zero Tolerance in one of the events of the day.  GWPF will begin the day at 10:00 in the morning, Eastern Standard Time at a mini retreat on activist well-being and psycho-social impact of FGM in Washington, D.C., sponsored by the Wallace Global Fund.  The retreat is facilitated by Psycho-Analyst and FGM Survivor, Leyla Hussein.  Then at 1:00pm EST, there will be a live FaceBook celebration of the commitment to zero tolerance for FGM.  Activists and advocates will continue to demonstrate Zero Tolerance for this health hazardous practice on little girls.

GWPF dedicates the day to all of the little girls past and present who were violated, and to all the women who have lived and continue to live with the consequences of FGM.  The day is also dedicated to the prevention of at-risk girls of FGM.  If you are not able to attend an event, and you wonder how you can participate, remember to wear an item of purple tomorrow, and make your voice heard that you will not tolerate FGM.  Fly a purple flag on your vehicle; wear a purple bow or tie, a purple flower or headband in your hair or wear a purple jacket or t-shirt.  Write a tribute on your social media page to the women and girls we have lost to FGM for the past five plus centuries.  Have a moment of silence for those whose lives were taken by the blade of their excisers. Let the world know that you care, and you want this atrocious and senseless practice to stop.

82 Replies to “Observance of International Zero Tolerance Day of FGM”