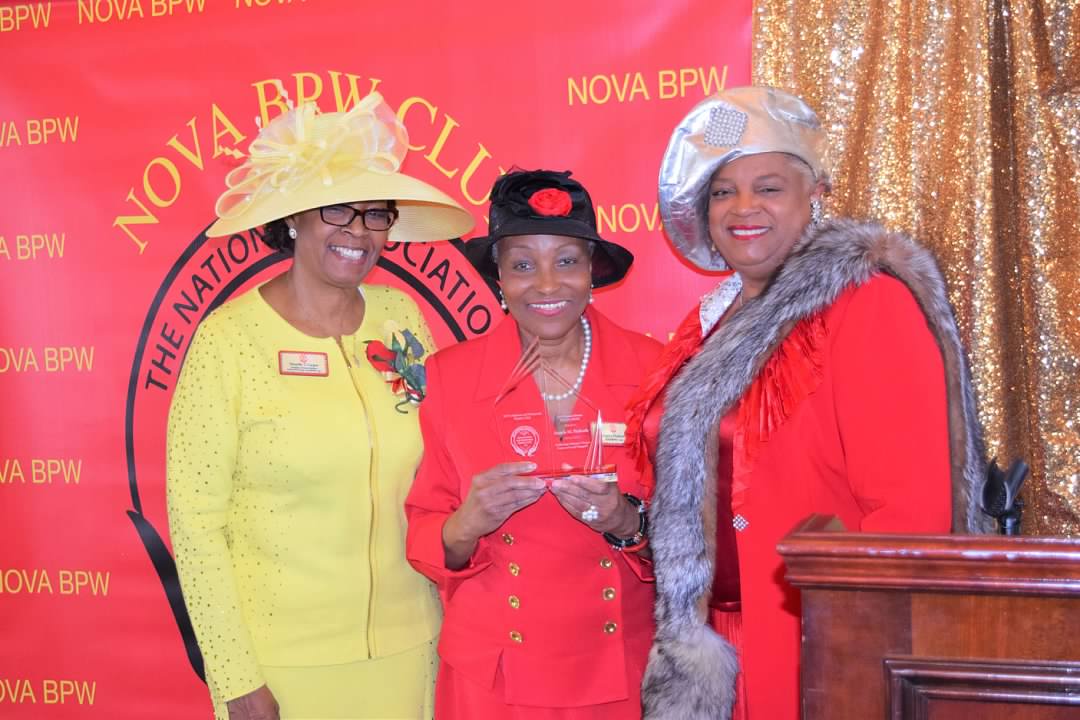 Last Saturday, April 6th at the Country Club of Fairfax, the Northern Virginia Business & Professional Women’s Club honored three business and professional women and two young entrepreneurs.  One of those women was Global Woman P.E.A.C.E. Foundation’s (GWPF’s) own Executive Director, Angela Peabody.  The Club invited their guests to join them on a sunny afternoon in celebrating visionary women, who are empowered and engaged in the community.  The Club’s President and Co-Founder, Sherelle Carper told the guests, “These award recipients are amazing women who have made a tremendous impact in their communities through more ways than one.”   She continued, “They represent women from diverse backgrounds, education and struggles.  As we carve out an entire month of March during the year, it is our honor to reflect on our ancestors who paved the way for African-American women’s freedom; we take pride in the commendable legacies they have left behind so that we will never forget.”

In July 2017, the Northern Virginia Business and Professional Women’s Club (NOVA BPW Club) was chartered with 42 active members as a new club, several of whom had been members of the Millennium-Seat Pleasant Business and Professional Women’s Club in Maryland.  The NOVA BPW Club aims to promote the mission and great work of the trailblazers who preceded them.  They foster and build fruitful relationships with their surrounding community, organizations, and businesses in the Fairfax, Loudoun, and Prince William Counties.

The program of the afternoon was intricately chaired and steered by the Club’s First Vice President, Janet Ford and her Co-Chair, Glynda Mayo Hall.  They led a planning committee of innovative women, each with her own responsibility to aid in a successful afternoon.  Within Janet Ford’s statement, she said, “One of our goals as the NOVA BPW Club is to be a positive voice and reliable resource in our community for women who are looking for an organization that embraces and celebrates the excellence in their lives, no matter how great or small the challenge may be.”  Glynda Mayo Hall, who nominated Angela Peabody stated, “Visionary Women who value truth and history, confirm that our ancestors made choices and strategic sacrifices, and continue to make purpose-driven and strategic choices to pave the path for ourselves, our youth, and each other.”  Mayo Hall further stated, “So we honor and acknowledge your presence as we honor the nominees and honorees for their outstanding contributions to women, youth, and our community.”

The GWPF’s Executive Director was nominated for two different categories; the Business Category and Professional Category.  In the Business Category, Peabody was up against some unequivocally successful business women, such as the owner of Deva Hair Gallery, Debra Smith Beale; President of Time To Fly Foundation, Michele Ruth Jones; CEO of EDJ Associates, Inc., Angela Moody; President of Ingrid’s World, LLC, Ingrid Parrish-Hicklin; and Yvette Steele of JADE Ministries.  The panel of 6 judges voted for Angela Peabody as the 2019 Business Honoree.  In the Professional Category, Peabody was up against Dr. Jacqueline Griffiths, Medical Director of New View Laser Eye, Inc.  The judges voted Dr. Griffiths as the 2019 Professional Honoree.  There was a Young Entrepreneur Category, one of which was an amazing 11-year old Fashion Designer, Skylar Raiyn Johnson.

In her acceptance remarks, Peabody thanked the Northern Virginia Business and Professional Women’s Club for acknowledging the work she and her organization do.  She said, “I share this award with all of the women and men who work with me at Global Woman P.E.A.C.E. Foundation to help women and girls against female genital mutilation (FGM).”  She ended her remarks with, “This award is for all the countless little girls who have lost their lives around the world as a result of female genital mutilation.”  Speaking with Global Woman Newsletter, Peabody, who is originally from the West African nation of Liberia, expressed her profound appreciation for the honor the Club bestowed on her and her organization.  She said, “It is always an honor when this work we do is recognized and appreciated, especially from your own peers.”  Peabody explained that it is not the accolades she expects in doing the work against FGM.  “What’s important is the number of Americans who learn about the criminal practice of FGM during our advocacy in the communities.”  The Executive Director of GWPF asserted how frustrating it is for her when some members of her own family and her native Liberia fail to fully understand the gravity of female genital mutilation.  “They regard the work I do as merely a hobby, and something not to be taken seriously.  It saddens me – however receiving recognition from people who are not Liberians, and are not family members, such as this Club encourages and incentivizes me to push forward in the dedication of my work.”  Liberia happens to be one of the FGM practicing countries in West Africa, and to date, still has no law against FGM.  Seated at Angela’s table with her were her two sons, Arnold and Fred DeShield, her three youngest grandchildren, Nadia, Victoria and Terrence DeShield, and GWPF’s Board Member, F.A. Cole.

Peabody was nominated and recognized due to her work in training law enforcement, school nurses, teachers, advocacy to help pass legislations in her Commonwealth of Virginia, and starting the only support group in the Washington, D.C. area for women and girls who have experienced female genital mutilation.  Recently she and her organization assisted with a Bill to include FGM in Virginia schools’ curriculum, which unanimously passed through both the Senate and the General Assembly.  But she does not intend to stop there; she and her Board of Directors are working on their next strategy against the practice of FGM.  When asked what would satisfy her most about the fight against FGM?  She simply responded, “Living long enough to see the day when little girls in the world are no longer subjected to the heinous practice of FGM.”

3 Replies to “GWPF’s Executive Director is Honored by the No. Virginia Business & Professional Women’s Club”