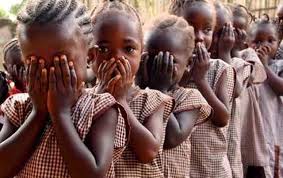 The author wrote that girls spend their time in the Sande School learning how to be wives, how to farm, how to dance, and learn about sexual matters.  There is nothing wrong with learning how to dance or farm, or even how to be wives; however those girls need a great deal more than that to constructively shape their lives for the future.  What sexual matters do the girls learn?  If you read Mr. Massaquoi’s article from two weeks ago, you noticed he failed to mention the excision of the girls’ clitoris and labia.

Mr. Massaquoi wrote that the clitoridectomy and labiadectomy are performed by female specialists called “Zoes”.  He failed to mention that their so-called female specialists possess no medical experience whatsoever.  Some of them are old mid-wives who have delivered babies in their villages for many years, with absolutely no formal medical training.  The rate of infant and maternal mortalities in Liberia is by far higher than those of other countries in the world.  The reason is partly due to those inexperienced Zoes and partly because the expectant mothers had been subjected to female genital mutilation (FGM) when they were little girls.

What a laugh to Mr. Massaquoi’s claim that in most African communities a “good” woman is a graduate from the Sande School.  The graduate must be young and a virgin, according to Massaquoi.  He boasts that his sister met all of those qualifications.  He wrote, “Marrying a young beautiful girl at the age of 18 was a blessing for the entire family.”  Mr. Massaquoi needs to wake up to reality.  There were countless of Liberian girls older than 18 years of age who were still virgins at the time of marriage, and they certainly were not graduates of the Sande School.  Exactly what constitutes a so-called “good” woman, Mr. Massaquoi; is it a woman with part of most of her genitalia missing?  Are you agreeing that all Liberian women who did not pass through the Sande School are not “good” women?  Your archaic article must have offended thousands of Liberian women who read it.  Mr. Massaquoi wrote, “Most men in Sierra Leone and Liberia prefer to marry women from the Sande Society. There is no doubt that the traditional school is a good place to find a serious partner for the future. Research has shown that the men who prefer Sande society graduates were serious about long-lasting relationship.”  Who are most men in Liberia and Sierra Leone to whom you referred when you wrote the above statement?  Many Liberian and Sierra Leonean men have come forward in recent years, to declare that they are totally against the practice of FGM, and they prefer women who have not experienced it.  Here are some statements from some of those men:  One husband said, “My wife is like a dead chickensleeping next to me.  She has no feelings” Another husband said, “I knew something was missing from my wife on our wedding night.”  A brother said of his sister, “I hurt for my sister because she has been married for so long and cannot have a child because of what happened to her as a child.”  Beside what these men had to say, there are the psychological problems the women who have survived FGM struggle with throughout their lives.  Most of them are confused as to why this atrocity was done to them.  Mr. Massaquoi, do they not explain to them in the Sande School why their external genitalia were being amputated?  The article mentioned that the girls are taught about sexual matters.  What sexual matters are they taught?  Do they tell them how painful their future sexual encounters will be, or that they might never conceive, or that their wedding night might feel like they are being raped?

Mr. Massaquoi said he disagrees with the notion that Africa is a male dominating continent.  He wrote, “It is misleading and most of all, unfounded.”  He also does not feel that there should be an end to the Sande Society practice in West Africa.  In his own words, he stated, “Asking the Zoes to abandon this age-old tradition is like telling someone to stop eating his or her favorite meal. As long the Zoes live, the organization will continue to influence the role of women in West Africa.”  What a comparison Mr. Massaquoi makes!  Comparing someone’s favorite meal to one of the most heinous and atrocious practices on little girls is absolutely preposterous, Mr. Massaquoi.  Know that your Zoes will be defeated by the rest of the world; they will not live forever.  Times have changed and continue to change, including for Liberia; men will stand up and continue to oppose the practice of amputating little girls’ genitalia.  The new generation of women are standing up and refusing to have FGM done to their daughters.

Mr. Massaquoi wrote in his article, “The society (meaning Sande) symbolizes the power of African women.”  What power does the Sande Society render to a girl by amputating part or most of her genitalia?  The very act and process of what is done to the girls leave them helpless and powerless.  The girls are violently restrained, sat on, and as they kick and scream, your so-called Zoes take unsterilized instruments, without using any anaesthesia and unprofessionally excise parts of their genitalia.  Is that how the Sande Society bestow power to women?  Education is the key to a bright future or empowerment to a girl.  The education received from the Sande Society is certainly not what a girl needs for a bright future in today’s world.  Mr. Massaquoi agrees in his article, “Modern education prepares people to read and write. In the Sande Society there is the opposite. I think the time has come to re-examine the society’s role. I have relatives and friends who graduated from the Sande Society who cannot read or write.”

However Mr. Massaquoi did attest in his article that FGM and the Sande Society go hand in hand.  He declared, “It is difficult, if not impossible, to get rid of this time-tested tradition in Africa.”  Is it difficult to end FGM in Africa?  Yes, it is difficult, but not impossible.  Most FGM- practicing African countries have already banned the practice.  To date, Liberia, Sierra Leone and Mali are the only three African countries without a law against practicing FGM.  The strong hold of your Sande and Bondo Societies in both Liberia and Sierra Leone is mostly the reason for the hold-out of imposing a ban in those countries.

Mr. Massaquoi admits, “Female circumcision is not only a tradition; it is today a source of income (especially for the Zoes). The more girls one circumcises, the more money one makes.”  He is absolutely correct in his prior statement; FGM has become more of a source of income in the Sande and Bondo Societies than a tradition.  The Zoes get handsomely paid by the parents and guardians for excising the girls.  It is business as usual as far as those so-called Zoes are concerned.  Giving Mr. Massaquoi some credit for ending his article sensibly and logically when he wrote, “Female circumcision is a crime against humanity. The people of Africa cannot allow this act to continue. It must be stopped now. It is time to educate those who are still promoting female circumcision that they must be more concerned about the health of their daughters than satisfying the egos of men.”  The preceding statement contradicts what Mr. Massaquoi covered in most of his article.

Obviously Mr. Massaquoi grew up in a society and era that hailed the practice of FGM.  But he now resides in a country (Sweden) that disdains the practice of FGM, and enforces laws against it.  Perhaps it is his current country of residence that has the impact on him to admit that it is time to educate the parents, and teach them to concern themselves with the health of their girls as opposed to continuing an old-aged archaic practice.