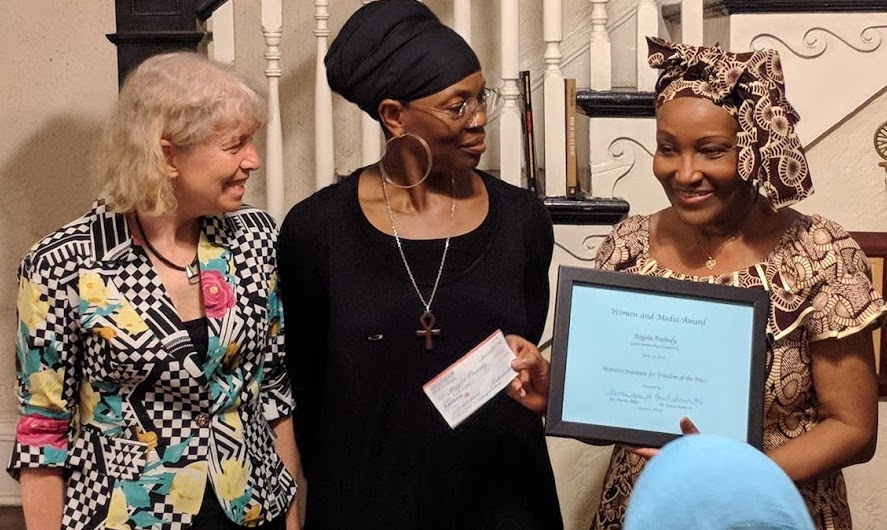 The oldest supporter and partner of Global Woman P.E.A.C.E. Foundation bestowed recognition and honor on the organization.  The Women’s Institute for Freedom of the Press (WIFP) held an Activist Salon at their headquarters in the Woodley Park area of Washington, D.C. last Saturday evening.  Since 2013 the Women’s Institute for Freedom of the Press has given out their annual award, “Women and Media Award”.  The award is usually given to a woman who has made exceptional contributions toward expanding female voices in the media.  The first award in 2013 was given to Maurice Beasley.  Tobe Levin, Roxanne Dunbar and Soraya Chemaly received the Women and Media Award in 2014, 2015 and 2016 respectively.  This past Saturday the award was presented to Angela Peabody of Global Woman P.E.A.C.E. Foundation for the work she and her organization do on behalf of women.

Prior to the presentation of the award from WIFP, Angela Peabody was joined at the podium by one of the board members of GWPF, Aula Mohammed.  Mohammed explained the nature of work in which GWPF engages, and the details of the cause of the organization.  She asked how many in the audience were knowledgeable of female genital mutilation (FGM), and only a few hands were raised.  She proceeded to define and explain how horrific the practice of FGM is on innocent little girls.  Aula told the audience about the programs GWPF has implemented, such as the Kids Reach Shield program, designed especially to train law enforcement to the cultural aspects of FGM, the Survivor Resettlement program and the monthly Support Group Workshop.

In her acceptance speech, Angela Peabody told the audience that she shared the award with everyone at GWPF and most especially with the FGM survivors whom they serve.  Peabody said, “I do this work not for the accolades, but for the difference it makes in the lives of the women we serve.”  She fought back her emotions as she told the audience how much it means to her when a woman tells her she now has hope because of the assistance GWPF provides.  “This check will go a long way,” Peabody told Martha Allen and Elana Anderson, as she held up the accompanying check.  Although Martha and Elana reminded Angela that the check was made out to her and was for her, she insisted that it will be spent on the women GWPF serves.

The Women’s Institute for Freedom of the Press (WIFP), an American nonprofit publishing organization operates as both a national and international feminist network.  WIFP increases communication through its work between women and the public with forms of women-based media.  Founded by Dr. Donna Allen more than 45 years ago for democracy and justice for the media, the organization is headed by its President, Dana Densmore, Ph.D, Director Martha Leslie Allen (the daughter of the Founder) and Associate Director, Elana Anderson, Ph.D.  Dr. Donna Allen was an economist, historian, author, feminist and a peace and civil rights activist.  She was a real crusader for a democratic communications system.  Martha joined her mother’s Institute in 1975 as a full time employee, after she had put together the first Directory of Women’s Media and an index of Media Report to Women. To date this directory continues to be published.  Prior to joining the WIFP in 1975, Martha worked in the southern part of the United States where she worked with the civil rights, peace and women’s movement for the Southern Conference Educational Fund and later for the Operation Freedom.  Although she was active with other progressive causes, issues related to democracy for the media became Martha’s primary focus.

The Activist Salon Saturday evening also featured the New Story Leadership (NSL), an organization that unites the next generation of leadership in the Middle East.  It was amazing to see two young women – one from Israel and another from Palestine present their individual stories to the audience together.  They told about the work they are doing in the Middle East to bring future leaders together to work in harmony toward a peaceful future.  One of the young women ended her presentation by saying that women are going to lead the resolve in the Middle East.  She received a resounding applause.  At the end of their presentation, the young women embraced each other to exhibit the solidarity toward which they are working.

The Women’s Institute for Freedom of the Press was the first organization to recognize and support Global Woman P.E.A.C.E. Foundation in 2014.  Martha Allen and Elana Anderson were actively involved in the first Walk To End FGM in 2014.  WIFP won the first place prize for raising the most money in the 2014 Walk To End FGM.  The relationship between the two organizations has enjoyed an unwavering growth from the first day it was established.

Global Woman P.E.A.C.E. Foundation is known for giving recognition and honor to individuals who work on behalf of women and girls.  Therefore when it found itself at the other end of the spectrum as a recipient of recognition and award, the gratitude is exhilarating.

When you shop during this year at Amazon, please remember to select Global Woman P.E.A.C.E. Foundation as your charity of choice.  Please consider us when shopping. Your shopping makes a difference. Do your regular Amazon shopping at and Amazon donates to Global Woman Peace Foundation.