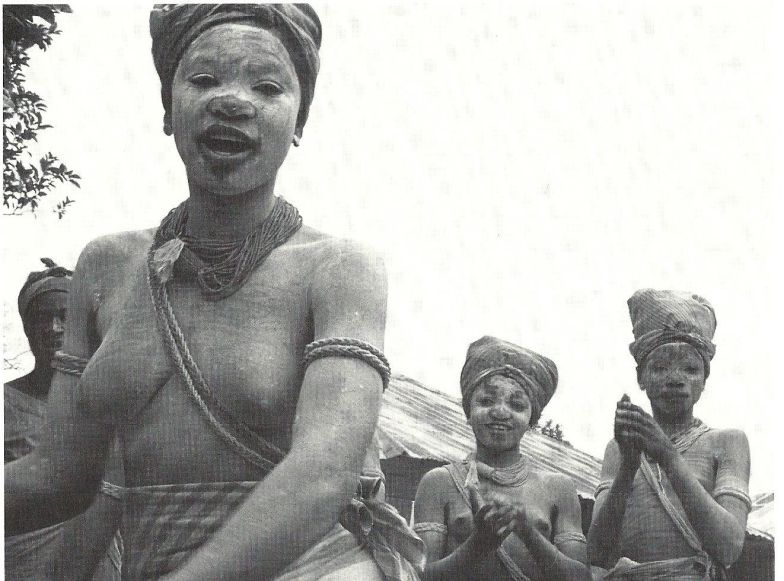 The Sande or Bondo Society for girls is very popular in West Africa. African historians believe the society originated among members of the Gola tribe as an institution to train girls. Later, other Liberian ethnic groups like the Vai, Mende, Lorma, Kpelle, Mano, Bassa, and Kissi adopted the whole concept of the society.

This secret society is more than a training ground. It maintains an interest in the well-being of its members throughout their lives. The society champions their social and political interests and promotes the solidarity of its members.

Liberia and Sierra Leone have played a vital role in the training of young girls for future generations. For some parents, the traditional school is the ideal place for these girls to acquire their education. The training period lasts for six months to three years depending on the country and the ethnic group. While enrolled in the Sande School, the girls are taught many important subjects, such as the role of a wife, farming, sexual matters, dancing, music, tie-dying cloth, and traditional medicine. Membership in the Sande is a prestige for the young initiates because few opportunities exist for women who have not been initiated.

I grew up in a family that strongly believes in this tradition. In fact, my oldest sister Hawa acquired her education from the Sande School. It was forbidden for a girl to marry before initiation. After the initiation, the girls adopt Sande society names. The Clitoridectomy and labiadectomy are performed by female specialists who are called Zoes.

Who is a good woman?

According to a popular school of thought in many African communities, a “good” woman is someone who has graduated from the Sande Society. She must be young and, most of all, a virgin. My sister met all of these qualifications, but that was the 70’s and her dead husband Mr. Kaifa Kamara was the lucky one. Marrying a young beautiful girl at the age of 18 was not only a blessing for the entire family: parents were very proud of their children who were trained by the Sande Society.

Most men in Sierra Leone and Liberia prefer to marry women from the Sande Society. There is no doubt that the traditional school is a good place to find a serious partner for the future. Research has shown that the men who prefer Sande society graduates were serious about long-lasting relationships.

The irony of the whole story is that most of these men were in fact practicing what I would call a double standard. It was common to see a man playing the role of a Casanova before getting married. For the girls it was a taboo: all women are supposed to be virgins until the wedding night.  There is a crazy notion that Africa is a male dominating continent. I do not share this view, because it is misleading, and most of all, unfounded.

Must there be an end to the Sande society and its practice in West Africa? I do not think so. Asking the Zoes to abandon this age-old tradition is like telling someone to stop eating his or her favorite meal. As long the Zoes live the organization will continue to influence the role of women in West Africa.

The society symbolises the power of African women. Though the wooden helmet masks that are used by the women are designed by men, it represents the ideal of womanhood and feminine beauty.  The dance and music are also vital in the sense that young girls who graduated from the Sande Society ended up becoming the best culture troupe dancers in West Africa. The artistic ability of these girls is beyond imagination. African women are full of talents; the Sande Society has helped these young girls to develop their God-giving talents.

Female Genital Mutilation (FGM), or female circumcision in popular-speak, and the Sande society go hand in hand. It is difficult, if not impossible, to get rid of this time-tested tradition in Africa. Female circumcision is practiced in many parts of Africa. Thirty African countries still uphold the principles of FGM. Thousands of girls go through this cruel ritual on a yearly basis. Over 90 million African women are victims of female circumcision.

Human rights advocates from all parts of the world have condemned the practice, because is a violation of the rights of women and girls. Some efforts are being made to stop this tradition in Africa. African countries such as Senegal, Uganda, Ghana, Ethiopia, and Togo have banned the practice, along with many other nations.  Liberia, Mali and Sierra Leone remain the 3 African countries without laws that ban the practice.  In spite of this progress, the fight against FGM is still raging because it will take a lot more than just some countries to lessen the impact of FGM on such a big continent.

The situation is even worse in a little country like Sierra Leone. Every female teenager in the West African country is subjected to female circumcision. The practice is sadly still legal in Sierra Leone. Majority of the men in Sierra Leone are not willing to marry a woman who has refused to join the Sande Society.

The World Health Organization (WHO), an organ of the United Nations, has warned many nations about the risks of female circumcision. In Sweden and many other countries in the world, it is not only wrong to circumcise a female, legal action is taken against those who violate the law banning the practice.

Female circumcision is not only a tradition; it is today a source of income (especially for the Zoes). The more girls one circumcises, the more money one makes.

However, we cannot underestimate the value of education that the society imparts. The Sande or Bondo Society helps prepare young girls for the future.  The question today is what kind of education these girls are getting?

Modern education prepares people to read and write. In the Sande Society there is the opposite. I think the time has come to re-examine the society’s role. I have relatives and friends who graduated from the Sande Society who cannot read or write.

After the initiation, the girls are advised to get married. For most of those who were undergoing regular schooling, marriage prevents them from furthering their regular education. Without the proper balanced education these females become powerless.

Today, many parents do not know where to draw the line in the battle between traditional education and modern education. The question thus remains, as to which school is the best and why? Should the Sande Society combine both institutions of learning? Which age is the best? I mean when do you begin?  The answers to this thought-provoking question will help all of us in the long run.

Female circumcision is a crime against humanity. The people of Africa cannot allow this act to continue. It must be stopped now. It is time to educate those who are still promoting female circumcision that they must be more concerned about the health of their daughters than satisfying the egos of men.

Comments and questions to  info@globalwomanpeacefoundation.org or call (703) 832-2642