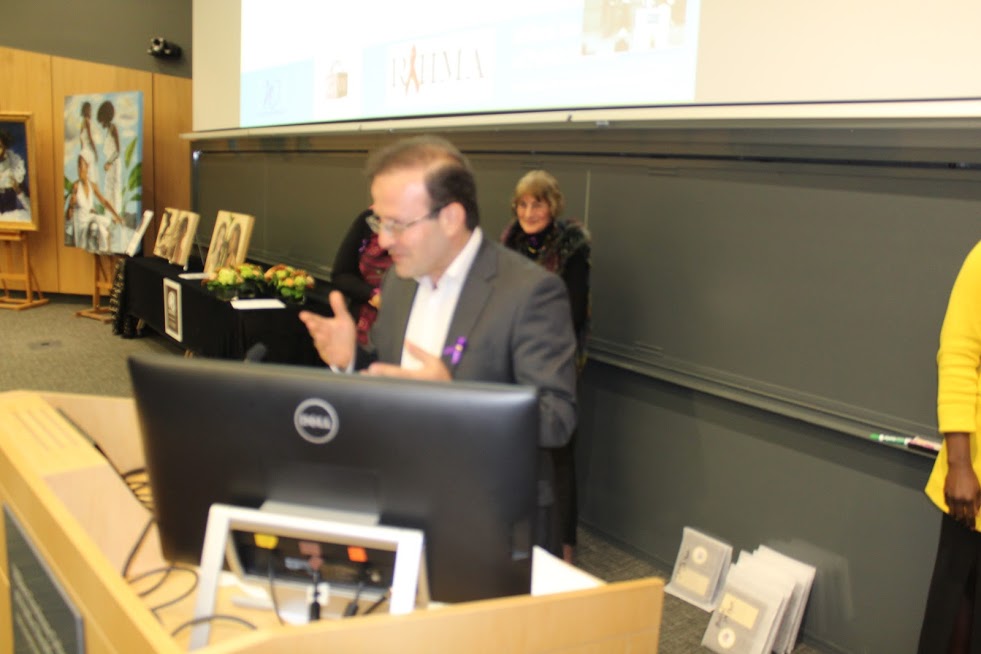 It is in this edition of the Global Woman Newsletter that the 2019 Award Recipients would have been announced to the world.  Instead, the disturbing news of the imprisonment of Global Woman Awards’ 2018 Literary Awardee, Mr. Kameel Ahmady changed the plans in making that announcement.

According to the Center for Human Rights in Iran, Anthropologist and an Iranian-British citizen, Kameel Ahmady was arrested and detained on Sunday, August 11, 2019.  The Human Rights Center reports that the Iranian authorities have not allowed Kameel’s family to visit him since his detention more than a week ago.

Born in the Kurdish city of Mahabad in Iran’s West Azerbaijan Province, Kameel received his Bachelor’s Degree from the University of the Arts, London, and his Master’s Degree from the University of Kent, Canterbury in the United Kingdom.  He received his British Citizenship approximately 25 years ago, but has spent most of those years conducting his research studies and literary work in Iran with his family.  In 2016, Kameel’s book, In the Name of Tradition: Female Genital Mutilation in Iran was published by Dr. Tobe Levin’s publishing company, UnCut Voices.  His book was hailed by the Guardian and the International Gender Studies Center.

In the Foreword of the book, Kameel wrote, “Female Genital Mutilation is an issue of urgency to feminists, human rights campaigners and social activists as well as international organizations such as UNICEF and many responsible governments determined to end it. I join them.”  He said, “This research began when I returned from Europe after a prolonged absence to my birthplace, Iranian Kurdistan, to learn more about FGM. For several years I had worked in Africa with humanitarian relief NGOs and observed UN projects to combat excision in countries like Egypt, Somalia, Kenya and Sudan.”  Kameel also added in his book, “Remembering hushed tones from my childhood suggesting that FGM, locally called sunnet existed in some parts of Iranian Kurdistan, I decided to conduct some preliminary research beginning with my own family and close relatives. Imagine my shock when uncovering evidence that FGM had long existed in areas of Mukriyan and that my grandmothers, mother and sister had all endured it.”

As an Anthropologist, Kameel has conducted extensive research, not only on female genital mutilation, but such controversial topics as child marriage, gender, honor killing, homosexuality, and white marriage.  In 2017, a year after his book was published Kameel produced a documentary on FGM in the Northwestern part of Iran.  That same year, he received the IKWRO True Honor Award.  His first book, Another Look at East and Southeast of Turkey was published in 2009 in Istanbul.  It is a guideline for traveling to the east of Turkey, and provides an anthropological and ethnographic approach towards 15 provinces that are inhabited by the Kurds of Turkey.

In 2018, he completed his most recent study, A House on Water: A Comprehensive Study on Temporary Marriage and Sigheh Mahramiat wasreleased in both English and Farsi.  Kameel said about this book, “I discovered that a great number of children are married to other children, and to older men.”  Kameel was excited about this latest project on white marriage, which is about cohabitation.  He said, “Cohabitation is a new trend among the young men and women in Iran.  This type of relationship is illegal in Iran, and is hidden from the public.”  He added, “Some of the implications of this are that problems such as domestic and sexual violence, abuse, and abortion go unreported.”

In October 2018, Kameel traveled from Iran to Washington, D.C., after being nominated by an International Nominating Committee to receive the Global Woman Award in the Literary Category.  His journey to Washington, D.C. took him more than 18 hours, but he was still enthusiastic at the prospect of being nominated.  He said when he was notified of his nomination, “I will come to Washington, no matter how long it takes me, just to receive such an honor.”  Kameel won first place in the Literary Category for his work on gender, children and minority issues.  He delivered a moving acceptance speech that evening, by which many in the audience still remember him.

Ahmady’s wife, Shafagh Rahmani told the Center for Human Rights, “I was traveling when Kameel was arrested.  I came back on Monday and on Tuesday I went to the court in Evin Prison to ask about his situation.”  She continued, “The judicial authorities did not respond to my questions.  They told me that his case had to do with national security and he was arrested by intelligence agents.”  Mr. Ahmady who works as an independent researcher and writer in Iran has always been transparent in everything he did.  His wife told the Human Rights Center, “I really don’t know why he was arrested. He had never been detained, summoned or threatened before.”  His wife continued, “They said a one-month detention order had been issued against him and it was probably going to be extended. I asked why my husband hadn’t called me yet. They said he would.”

According to the Human Rights Center, only a one-minute phone call from the Evin Prison had been allowed from Kameel since his detention on the 11th and no contact with his family.  His wife told the Center, “On August 13th, around 6:30 in the evening, Kameel called me,” she added. “He spoke just for a minute and said he was feeling fine and asked me to get him a lawyer. I need to be informed of my husband’s situation and his case. I want to see and speak to him.”  Kameel’s wife contends that all of her husband’s research work has been done and published independently with permission from the Islamic Guidance Ministry.

The news of Kameel’s arrest and detention has been equally disturbing and concerning for FGM advocates and activists here in the United States and other parts of the world.  His work in the interest of women, children and the youth is now on hold since he is detained.  Global Woman P.E.A.C.E. Foundation sends out an appeal, asking for the release of Kameel Ahmady (#freekameel) in order for him to continue the brilliant work that he does.  Prayers and thoughts continue to be expressed for Kameel and his family from colleagues around the world.

When you do your back to school shopping at AmazonSmile, Amazon donates to Global Woman P.E.A.C.E. Foundation.