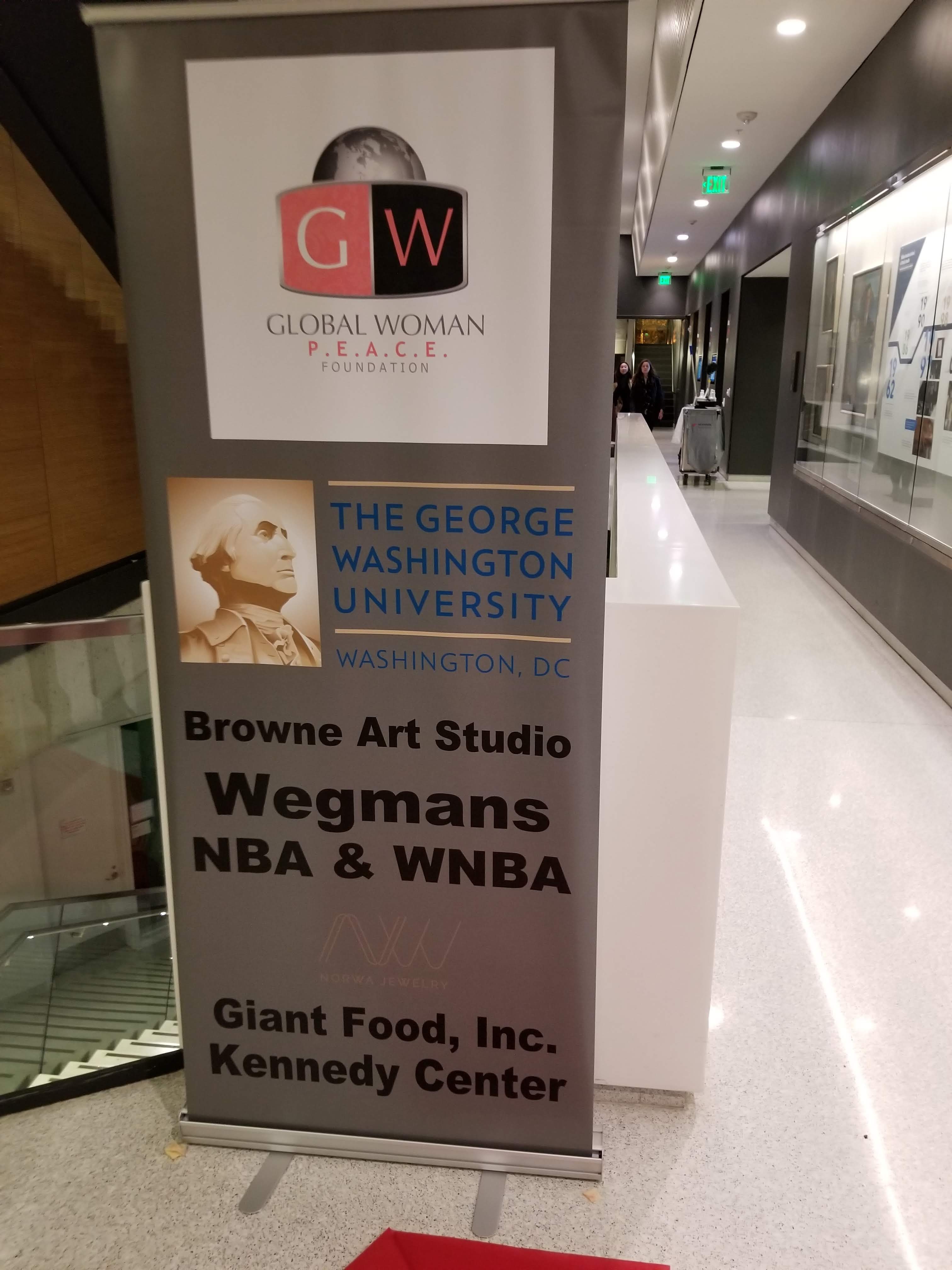 This past weekend was the 2-day event of Global Woman P.E.A.C.E. Foundation.  The 2-day event commenced with their Global Woman Awards ceremony Friday evening at the Milken Institute of George Washington University.  The Friday event was in collaboration with George Washington University in helping to dispel the myths and misconceptions of female genital mutilation (FGM).  The downpour of rain did not deter the attendees from piling in the 200-capacity auditorium at the Milken Institute for Public Health.

Following refreshments and mixing and mingling with Red Carpet moments for some, the guests were escorted to the auditorium for the show to begin.  With the Emcee of the evening opening by giving a brief history of the organization, and introducing the silent auction items, the excitement and curiosity grew.  The question lingered, “Who would walk away with an award and who would not?”  Seated in the first three rows were the award nominees and the award presenters.

Dr. Karen McDonnell and Khadija Abdullah of George Washington University and Rahma respectively gave welcome remarks to the audience before Angela Peabody of Global Woman P.E.A.C.E. Foundation offered introductory remarks.  Peabody told the audience that she always envisioned the faces in the room, precisely as they were Friday evening. “Looking around the room, I am seeing a mini United Nations,” Peabody remarked.

The award winning film, In the Name of Your Daughter by Giselle Portenier was a great way to kick off the evening.  A three-minute trailer of the film was viewed by the audience, followed by a brief Q&A on the film.  Portenier just happened to be an award nominee in the category of “Political”.

Then the Keynote Speaker of the evening, Dr. Azizah al-Hibri took the podium, and proceeded to dispel the religious myths and misconceptions of FGM.  In her twenty-minute PowerPoint presentation, Dr. al-Hibri defined and explained various passages of the Qur’an, dispelling the belief that FGM and Islam are synonymous.  She explained that Abraham did have the men in his household circumcised but there were no women or girls whom he had circumcised.  Her presentation served to dispel that FGM is not an Islamic practice, neither is it a Christian practice, nor a Jewish practice.  In other words, FGM is not mandated by any religion, and should not be termed as a religious practice.  Dr. al-Hibri caught the audience by surprise when she explained how the man is supposed to ensure that his wife, mate or partner reaches satisfaction in lovemaking before he reaches his satisfaction.  A roar of applause erupted from the attentive audience.  A few questions from the audience were directed to Dr. al-Hibri following her auspicious presentation.

Then it was time for the moment everyone had anticipated all evening; announcing the winners of the awards in all ten categories.  The first award was in the Legal Category, presented by 2015 Awardee, Shelby Quast of Equality Now and 2016 Awardee, Susan Masling of the Department of Justice.  The presenters told the crowd that FGM is not just an issue in Africa, Asia and the Middle East; it is an issue here in the U.S.  The second place winner was Dexter Dias of the Queen’s Council in the U.K. and the first place winner was Pennsylvania Attorney, Ayodele Gansallo.

The Political Category was presented by Lola Oje, an architect and FGM survivor who traveled from Nigeria and Julie Taitt, an Advisor to the Board of the organization.  Julie and Lola reminded the audience that to date, 27 U.S. states have had FGM criminalized.  The winners in this category were a tie for second place, which went to Maine Representative, Heather Sirocki and U.K. Member of Parliament of Rotherham, Sarah Champion.  Filmmaker, Giselle Portenier walked away with the first place award.

Presenting the Media Category were 2016 Awardee, Diane Walsh of Canada and Emira Woods, a Trustee of the Wallace Global Fund.  The presenters made a statement as a cry out to the U.S. Media, that FGM is poorly understood by most communities in the United States.  The lone winner of the evening in the Media Category was David Indeje, a Kenyan Journalist who was unable to travel from Kenya.

Presenting the Advocacy Category were Dr. Ghada Khan of George Washington University and the US End FGM/C Network and Dr. Martha Allen of the Women’s Institute for Freedom of the Press.  The Presenters pointedly said, “While the media disseminates information broadly, advocates serve as allies and boots on the ground, who amplify information to create change.”  They continued, “the commitment of advocates has put FGM on the global agenda and has led to great strides in the prevention of FGM, such as the creation of targeted community education, awareness, and prevention programs, survivor targeted health and social service programs, laws, and policies.”  Winning 2nd place in this category was Adriana Kaplan of Spain, and taking first place was Susan McLucas, a longtime advocate against FGM in Massachusetts.

Dr. Tobe Levin, a Professor from Germany and Irene Okpaghoro, a Public Health Master’s student of the Milken Institute presented the Literary Category.  The Presenters told the audience that language has the power to manifest change, and tackling specific issues that are relevant at hand, such as FGM is monumental.  The winners in the Literary Category were Rahmah Abdulaleem, the interim Executive Director of KARAMAH (2nd Place Winner) and Kameel Ahmady, a British-Iranian Journalist was the first place winner.

The Survivor Activist Category were presented by F.A. Cole, Author of Distant Sunrise and Djessou Kouyate of IAC-USA.  Cole and Kouyate told the audience that the FGM survivors risk facing shame from within their own families and communities when they share their stories.  However every woman’s experience of FGM is her own, and unlike any other, she courageously shares her story through personal accounts.  The winners of this special category were Marie-Claire Moraldo, a French Survivor Activist (2nd Place Winner) and Severina Lemachokoti, a Kenyan Survivor Activist was the 1st Place Winner.

Dr. T. Wayne Bloodworth of the Surgical Center for FGM in Atlanta presented the award in the Medical Category.  Dr. Bloodworth said that although it is perceived by those who practice FGM that by performing it at an earlier age protects girls from experiencing the harmful effects of it is a myth.  Regardless of age, the health outcomes are just as negative and harmful.  The 2nd Place Winner of the Medical Category was Dr. Ranit Mishori, Faculty Advisor of Georgetown’s Asylum Program.  The 1st Place Winner was Dr. Mawaheb El-Mouelhy, an Independent Reproductive Consultant in Cairo, Egypt.

Presenting the Education/Training Category were Board Members of Global Woman P.E.A.C.E. Foundation, Vice President Amie Jallah and Director Dr. Wallicia Gill.  They said that Education is the most powerful weapon against the practice of FGM, and to be effective agents of change FGM can be prevented by educating others.  The winners in this category were Hazel Barrett, an internationally recognized expert in FGM from the U.K. and Dr. Karen McDonnell, Associate Professor of the Milken Institute were in a tie for first place.  Taking 2nd Place was Barbara Nowak, a Health Service Coordinator of Alexandria Public Schools in the U.S.

Sandra Roland, an Appellate Public Defender and Mariya Taher, Founder of Sahiyo presented the Student Ambassador Category.  They pointed out that girls matter, and investment must be made in their futures to make sure they are protected from harmful practices. The winners in this category were Fatu Drame winning 2nd Place and Maria Akhter winning 1st Place.

Fundraising Chair of the organization, Aula Mohammed and Sherelle Carper, President of the Northern Virginia Business & Professional Women’s Club presented the final category, the Person of the Year.  The presenters explained why the winner of this category deserved it.  It is because they go above and beyond to support the cause against FGM.  Therefore Dr. Beryl Dorsett became the 2018 Person of the Year.  She humbly shared her award with her colleague, Joetta Brown.

As though the weather was not bad enough on Friday evening, it decided to test the dedication of advocates and activists against FGM on Saturday.  In spite of the torrential rain and vicious wind, people showed up to the National Sylvan Theater, hoping to Walk To End FGM.  People huddled together to keep warm and away from the rain and wind as the guest speakers stood at the podium and allowed their voices to be heard.  FGM survivor, Lola Oje from Nigeria shared with the crowd that she is third generation FGM survivor, and she refuses to allow her beautiful daughter to be subjected to FGM.

Dr. Joanna Vergoth told the shivering crowd how important it is for FGM survivors to go through counseling and therapy.  She said the healing process does not end with the physical portion.  The psychological process is just as crucial for survivors to move forward with their lives.  She urged survivors to seek counseling.  Vergoth dedicates her time counseling women and girls who have undergone FGM. 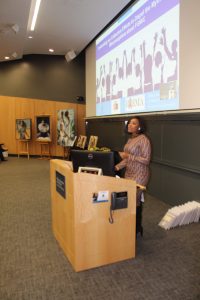 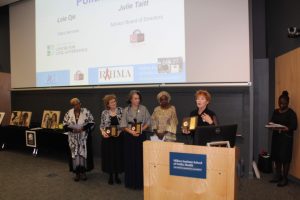 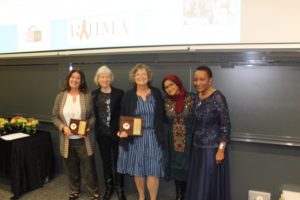 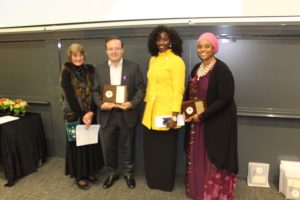 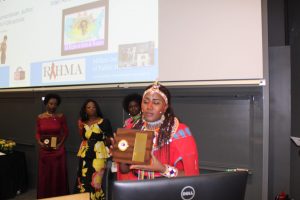 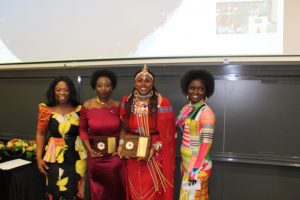 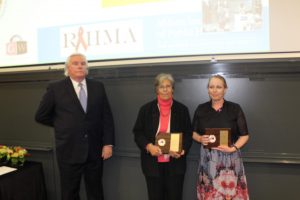 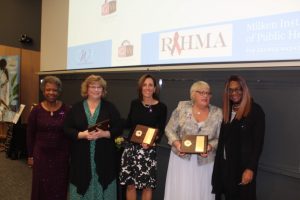 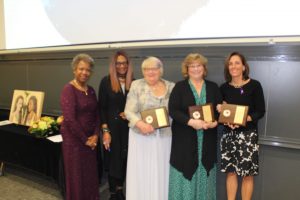 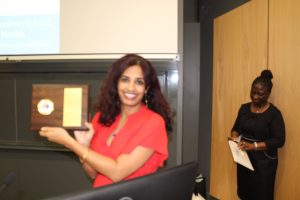 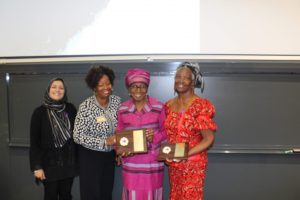 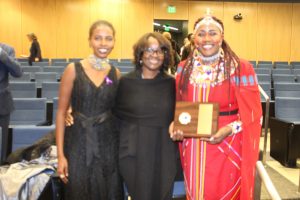 Unfortunately, the 5K Walk had to be cancelled due to the turbulent weather.  It was regretful since in 5 years the Walk To End FGM has always enjoyed sunny and lovely weather without precipitation.  The highest fundraiser was Marin Hoang, coming in 2nd Place are Aula Mohammed and Sherelle Carper in a tie, and Lisa Brett came in 3rd place. Global Woman P.E.A.C.E. Foundation congratulates all of their award winners and team prize winners.  Appreciation goes out to all of the sponsors such as Giant Food, Wegmans, Norwa Jeweler of Thailand, George Washington University, Browne Studio and the Kennedy Center.  Thanks to all of the supporters, fundraising teams, participants and donors.  We hope to see you in 2019! 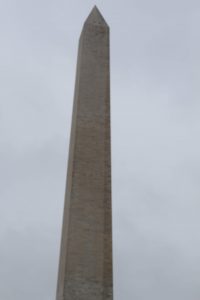 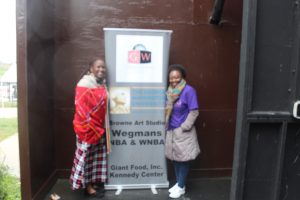 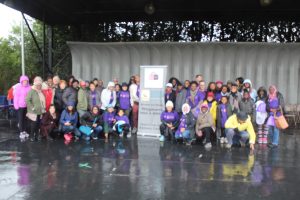 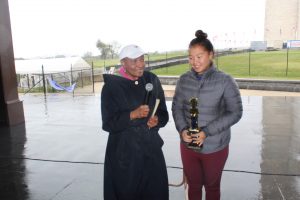 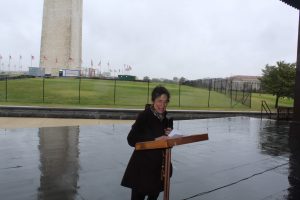 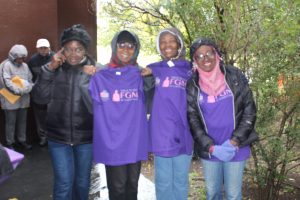