Next Thursday, November 28th, Americans will celebrate a day of thanksgiving.  The first Thanksgiving is known to have taken place in the year 1621.  It was a feast between the Pilgrims and the Wampanoag Tribesmen at Plymouth Colony.  According to Wikipedia, that first Thanksgiving meal consisted of waterfowl, venison (deer), fish, lobster, clams, berries, fruit, pumpkin, and squash.  The most popular item in next week’s Thanksgiving meal will be turkey.  What sets this holiday apart from others is that it is non-religious and is not restricted to any one ethnicity.  It is the one holiday in America that all religions and all ethnicities, regardless of citizenship come together to celebrate and give thanks.  According to travel agents and airlines throughout the country, Thanksgiving is the heaviest traveled holiday in the United States.  It is when everyone finds his/her way to families or friends to sit down to a traditional Thanksgiving dinner, regardless of Christian, Jewish, Muslim, Hindu, Buddhist or no religion at all.

Global Woman P.E.A.C.E. Foundation (GWPF) had barely recovered from their busy 2-day event last month, but they found the time to host a Thanksgiving Feast this past Saturday for their monthly Support Group of FGM survivors.  The Support Group has met every 3rd Saturday of the month since January of 2018.  To date, it is the only support group for FGM survivors in the Washington, D.C. metro area.  GWPF demonstrates care and love for the young women and girls whom they service, by sharing a special meal with them and their families each year.  Attending the feast were board members, Amie Jallah and Angela Peabody, Psychologist and 2019 Global Woman Awardee, Willa Jones, FGM survivors, and GWPF’s intern, Charbene Williams.

The menu comprised of a combination of conventional American Thanksgiving meal and a touch of West African cuisine.  They had a baked roaster, stuffing, baked potato, stewed green beans and tomato, baked salmon and jolof rice.  Jolof rice is a traditional West African dish, originated in the Gambia but most countries in that region have made the popular rice dish a favorite on their special occasion menu.  Dessert was apple and pumpkin pies.

Executive Director, Angela Peabody told the group how when she first suggested a support group a few years ago, Amie Jallah, their Vice President asked her where would they find FGM survivors.  She said, she told her, “If we start it they will contact us.”  She was right; their phone began to ring with women who had experienced FGM.  They realized how much in need of a support group the Washington, D.C. area was.  Peabody told the group that they are now a family, not just a group of women that meet once a month.  She said they are not just candidates for the restorative surgery and therapy.  They make up the family of the organization. GWPF has gained the women’s trust, and it is vital to the organization that the women have confidence in them.  Confidentiality and respect are key factors in servicing them.  Therefore they are not shown in photograph without their approval, and their names are never mentioned without their approval.

The afternoon was pleasant and enjoyable.  Prior to their meal, each person around the table said for what she/he was thankful.  Everyone dined heartily together, laughing, joking and telling stories of years prior.  Peabody said she hopes the support group can continue to give the women the love and care that they need in post-FGM years.

As families gather around their dinner tables next Thursday, what will they be grateful for this Thanksgiving?  Has it been a fruitful year for them?  Has it been a year of drought, unemployment, or violence for them and their families?  Or perhaps they overcame a terrible illness, and they’re thankful.  Whatever the reason is for being thankful, let’s think about the injustices around the world that women and girls suffer every day.  Let’s think about the little girls that will be hauled off into the remote bushes on that very day and parts or all of their external genitalia will be excised.  Please think about the more than 200 million women and girls in the world that have been violated through female genital mutilation.

Peabody said that beginning in 2020 the support group will strive to implement various ways to expand its service to additional women in other regions of the U.S.  During this year the support group asked the women to complete a feedback form to help the facilitators of the support group know how to improve their services.  GWPF has taken some of those responses into serious consideration for its 2020 plans.  The group is excited at the prospect of the plans for the upcoming year.

December 3rd is #GivingTuesday.  GWPF asks that you join them in the spirit by supporting the organization and the support group.  When you shop this season on Amazon, please choose Global Woman P.E.A.C.E. as your charity of choice.  As you, GWPF’s supporters make your purchases from amazon.com, please do so by supporting the organization at: https://smile.amazon.com/ch/42-1690778 and Amazon will donate to Global Woman P.E.A.C.E. Foundation.  Please use #StartWithaSmile.  We appreciate your donations and wish you happy shopping, and a safe and happy Thanksgiving!

Did you know that when you shop for the holidays at Amazon, AmazonSmile donates to Global Woman P.E.A.C.E. Foundation? 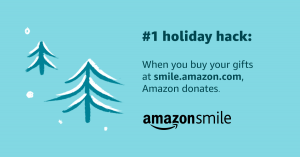