FGM LAWS IN THE

September 30, 1996, Congress enacted a law that criminalizes the practice of FGM in the United States. The law states that anyone whoever knowingly circumcises, excises, or infibulates the whole or any part of the labia majora or labia minora or clitoris of another person who has not attained the age of 18 years shall be fined under this title and/or imprisoned not more than 5 years

In 2013, Congress enacted the Transportation for Female Genital Mutilation Act,specifically prohibiting the act of transporting a girl outside of the United States with the intention of performing FGM, also known as vacation cutting. 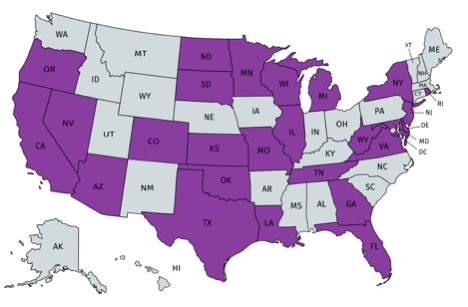 There are currently 26 states in the U.S. that criminalize FGM, shown in purple.

FGM is a crime in:

GWPF has been actively engaged in promoting states adoption of state policies that criminalize the practice of FGM.

GWPF staff has worked closely with Virginia Senator, Richard Black since 2016 to write and advocate for a bill that criminalizes the practice of FGM. In 2017, the Virginia Senate passed a bill making the practice of FGM a class 1 misdemeanor. GWPF has continued to work with Senator Black to increase the penalty from a class 1 misdemeanor to a class 2 felony.