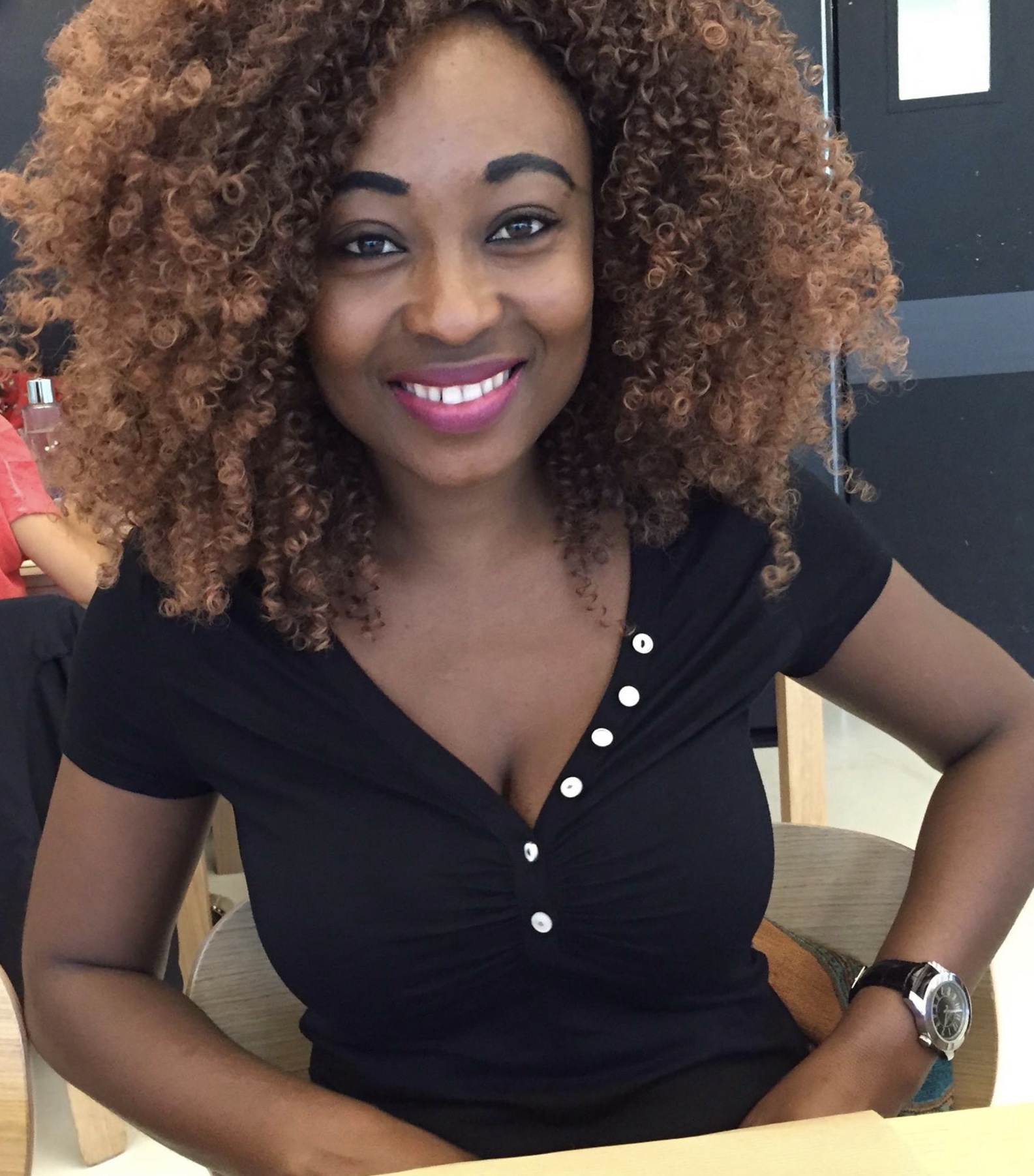 Marie-Claire submitted her story to Global Woman Newsletter in French.  Her story has been translated to English for the purpose of this publication.

My name is Marie-Claire Moraldo Kakpotia.  I was born on April 24, 1982 in Cote d’Ivoire in the town of Ferkessedougou, West Africa.  I grew up with my maternal grandparents in a house where we had no running water (indoor plumbing) or electricity.  When I was in primary school, I studied my lessons by an oil lamp.  However I believed that I had the will to succeed in my studies, regardless.

My mother was against excision (FGM), so in principle I was supposed to be immune from the danger of FGM.  But at the age of 9 years old, I was on vacation with my father’s family, and during a visit with my paternal aunt I was taken to a party, which I thought was a real party.  I did not know what the party was about.  When we arrived at the party, there were several girls lined up in front of an unfamiliar place.  They were all young between the ages of 3 and 9 years old.  I was then placed among the other girls.  I did not know what was expected, but I worried about one thing; every girl who came out of the room was crying.  It was hard to imagine that what was being done to those girls had anything to do with a party, and if the same would be done to me.

I entered the room when it was my turn, and four women brutally seized me, and I was slammed to the ground.  One of them came up with a knife and did what she had to do.  The pain was immeasurable.  The blood flowed from me.  My tears were endless.  But at no time did I realize what they had actually done to me or what consequences it would have on my life as a woman.  My mutilation was followed by silence.  My family did not talk about it because the subject was taboo.

Time passed as I grew up, and I met my first boyfriend, and Ivorian.  He never made any intimate advancement on me, and it did not make any difference to me.  I continued my studies to obtain my Degree in Commercial Management.  Then in 2004 when I was 22 years old, I was forced to leave my native Ivory Coast, due to political crisis, which erupted in a civil war.  I did not know what my future held in a country at war.  I moved to Dakar, Senegal, where I was fortunate to obtain a job as a Sales Executive.  It was during my stay in Dakar where I met a man from Marseilles, France, who would later become my husband.  For the second time in my life, I moved from one country to another.  That time I relocated from Senegal, West Africa to Marseilles, France with my husband.

What I did not mention before is that I had an Italian boyfriend prior to meeting my husband.  This boyfriend and I attempted intimacy, and he asked me, “But where is your clitoris”? That relationship did not last because he just could not get used to the lack of a clitoris.  Those same words resonated in me when I met my husband, and I was afraid.  From that time, I began my research to understand exactly what had happened to me when I was 9.  I wanted to know how the excision had affected my body and the impact of this violence on my life.  I developed an inferiority complex.  I did not feel like a full-fledged woman.  I said, “My life is over because I do not have a clitoris.”  Excision is not just a mutilated body; it is an attack that goes well beyond a mutilated body.  FGM mutilates a woman’s self-image, her relationship to her own body and her relationship to others.  We are constantly on the defensive about our relationships, our sexuality and our minds.

Unfortunately, my husband and I divorced, and I began a huge psychological repair job on myself.  I could not let this violence determine my fate after that.  In 2016 during my vacation in Senegal, I read in a magazine, the testimony of a woman who had been mutilated.  The woman talked about her circumcision which was unbeknownst to her parents.  She had only been 4 years old when FGM was done to her.  She talked about how she had undergone genital reconstructive surgery when she was 22 years old.  I found her story similar to mine.

When I returned to France I contacted Dr. Pierre Foldes, the inventor of a special method of repair of the clitoris.  On December 7, 2016 I had the genital reconstructive surgery.  I call that day my second birthday because when I woke up from the anesthesia, I was a different woman.  I smiled and I was serene.  That was the beginning of the mental process which has brought me to the present.  After the surgery, it was not only my body that has been repaired; the surgery had triggered the process of my mental repair.  Everything has now changed for me.  My sexuality and my relationship to myself, and to others have changed.  I began to participate in the support group at Women Safe, which is the Center of Dr. Foldes in Paris.

I realized there was no organization to support women in Bordeaux, France where I live, so I decided to establish L’association Les Orchidées Rouges (The Association of Red Orchids).  My organization is sponsored by Dr. Foldes and Ms. Frederique Martz through Women Safe.  I am the winner of the 2017 initiative in Bordeaux for the event I organized in February this year, to introduce excision and its misdeeds to the city of Bordeaux.

The purpose of L’association Les Orchidées Rouges is:

We are educating local people about the evils of the excision and are positioned to inform and alert these sensitive areas where excisions are implemented in Western Ivory Coast.  It is my hope that our action will extend all over the Ivory Coast, as well as France and other countries.

I now have a Master’s Degree in Business Management and Project Management from Kedge Business School in Marseille, France and I have also become an entrepreneur.  I founded Kapotia Fashions, a business which sells African jewelry online and at events such as trade fairs.  It is my goal to enable African women to use their handicraft to acquire financial independence and also live their own dreams.  I always remember this quote from Jean-Paul Sartre, “What matters is not what was done to us, but what we do for ourselves.”  I also remember the principles of my maternal grandparents with whom I grew up, “Always make the most of every experience, whether positive or negative to come out stronger.”

Today I am the proud mother of a 9 year old son, and I am a happy and serene woman in her social life and I am in love.  I wish the taste of life and the desire to succeed to all the women who have experienced violence in their lives.